A lot of customers in Greater China […] 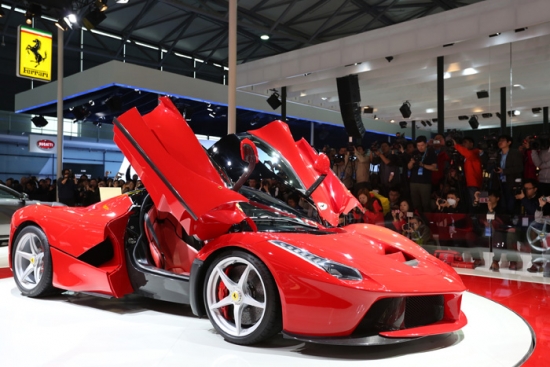 After Geneva, it’s Shanghai and LaFerrari is again the star of the show. As was the case just over a month ago at the Geneva Motor Show, Maranello’s hybrid supercar undoubtedly attracted the most attention from the press and public alike in Shanghai.

There was a sea of photographers and cameramen in front of the Ferrari stand, right from the opening of the show, waiting for the moment when Amedeo Felisa, the Maranello company’s Managing Director, unveiled the new special limited edition car for the first time in Asia.

“China is strategically very important for us and we will continue to invest in this market,” stated Felisa in his speech. “As of today, we already have 25 dealerships and to the intention is to reach 30 in 2013, before adding a further five the following year.”

After a very positive sales performance in Greater China (People’s Chinese Republic, Hong Kong and Taiwan) in 2012, when it became the second market in the world for the Prancing Horse with around 800 cars sold, the results in the first quarter of this year have also been positive. The Maranello MD placed particular emphasis on the extensive work carried out by Ferrari on reducing consumption and emissions of its range of cars, which has been reduced by 40% in the past five years, along with an increase in power of around 100 hp.

The fact that much attention is being paid to environmental themes in this vast country is underlined by Ferrari’s involvement in the “One Million Trees” project: no fewer than 67,000 trees have been planted by the company in a desert area of China to compensate for the emissions of its cars used on Chinese roads last year. Only 50 LaFerraris will find their way into the hands of owners in Greater China, out of a total production run of 499.