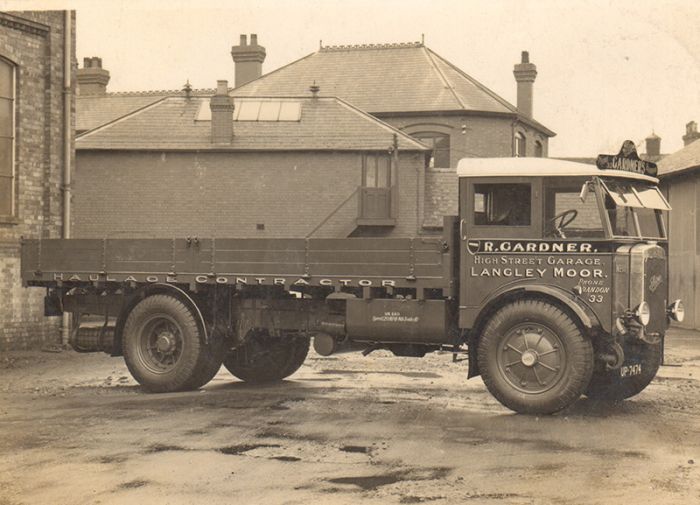 The visitor: Trucks for Cape Juby in Morocco

Share
Under the name of "The Visitor" I will occasionally publish reports on the history of the automobile and commercial vehicle that are not related to the topic of electric vehicles. We start today with "Trucks for Cape Juby in Morocco", which I hope you will like.

A high command of the Spanish protectorate Cape Juby in Morocco, a small strip of landscape close to the Canary Islands, but on the African continent, in 1933 commissioned a company of London to ask for the possible supply of large trucks with diesel engines suitable for African roads. The Betancor company contacted the Armstrong-Saurer, Crossley, Foden and Yorkshire companies. The answers together with their corresponding catalogues and documents were recently found at an auction in Las Palmas de Gran Canaria.

In 1931 the Armstrong-Whitworth company took over the licence to produce the Swiss Saurer heavy trucks, two and three axle models, equipped with modern diesel engines. Presented the same year at the Commercial Motor Show, these trucks were manufactured on an entirely new production line in the town of Scotswood, a factory that stood out for its use of very modern machinery. The models also received some components from the French Saurer, a branch of the Swiss company.

The Diesel engine was still quite new in those years, and Armstrong-Saurer did not forget to include in its advertising mail a book of its own regarding the great advantages of Diesel engines in heavy trucks. The book also talks about how this special fuel is acquired and what its great advantages are. The diesel engine was undoubtedly a very successful solution for propelling the trucks, standing out for its reduced consumption compared to the gasoline engine versions. Armstrong-Whitworth, a consortium specializing in armaments of all kinds, but also in rail vehicles and boats, wanted to open a new line of business with these trucks of Swiss origin.

The Armstrong-Saurer were manufactured between 1931 and 1937. With their air-pressure brakes and modern overdrive gearboxes in the 7 to 15 ton models, they were a very modern offering. Under the name of Diligent, Armstrong-Saurer offered a fast 5-ton truck, whose 4-cylinder diesel engine reached 64 HP at 1800 revolutions, with the name Durable a more powerful six-cylinder 85 HP model, but with the same payload, while the Dominant represented the top model of the brand, with 11 to 12 tons of payload, and six-cylinder diesel engine with 95 HP.

After the introduction of the new classes of rates, proposed by the British government from January 1, 1934, the 7-8 ton model with its four-cylinder engine was called Active, while its brother with six cylinders and then 110 hp was called Effective. The heavy model with up to 11 tons of payload was sold under the name Dynamic. The 15-ton Samson model was also offered, manufactured only in very few units. All Armstrong-Saurers were supplied with the more modern short (flat) cabin, as with the large nose typical of the time. Prices for these models were around £1,100 for the Active, and £1,250 for the Effective, models that were sold from 1934, while the Diligent, Durable, Dynamic and Dominant models cost £1,050, £1,300, £1,625 and £1,750 respectively.

The Crossley company, from Manchester and in the market since 1912 being a specialist in military vehicles and buses mainly, offered between 1932 and 1938 a small range of trucks with payloads between 3 and 7 tons and diesel engines of four or six cylinders. The two main models were the Atlas with a six-cylinder engine and the Beta with a four-cylinder engine. 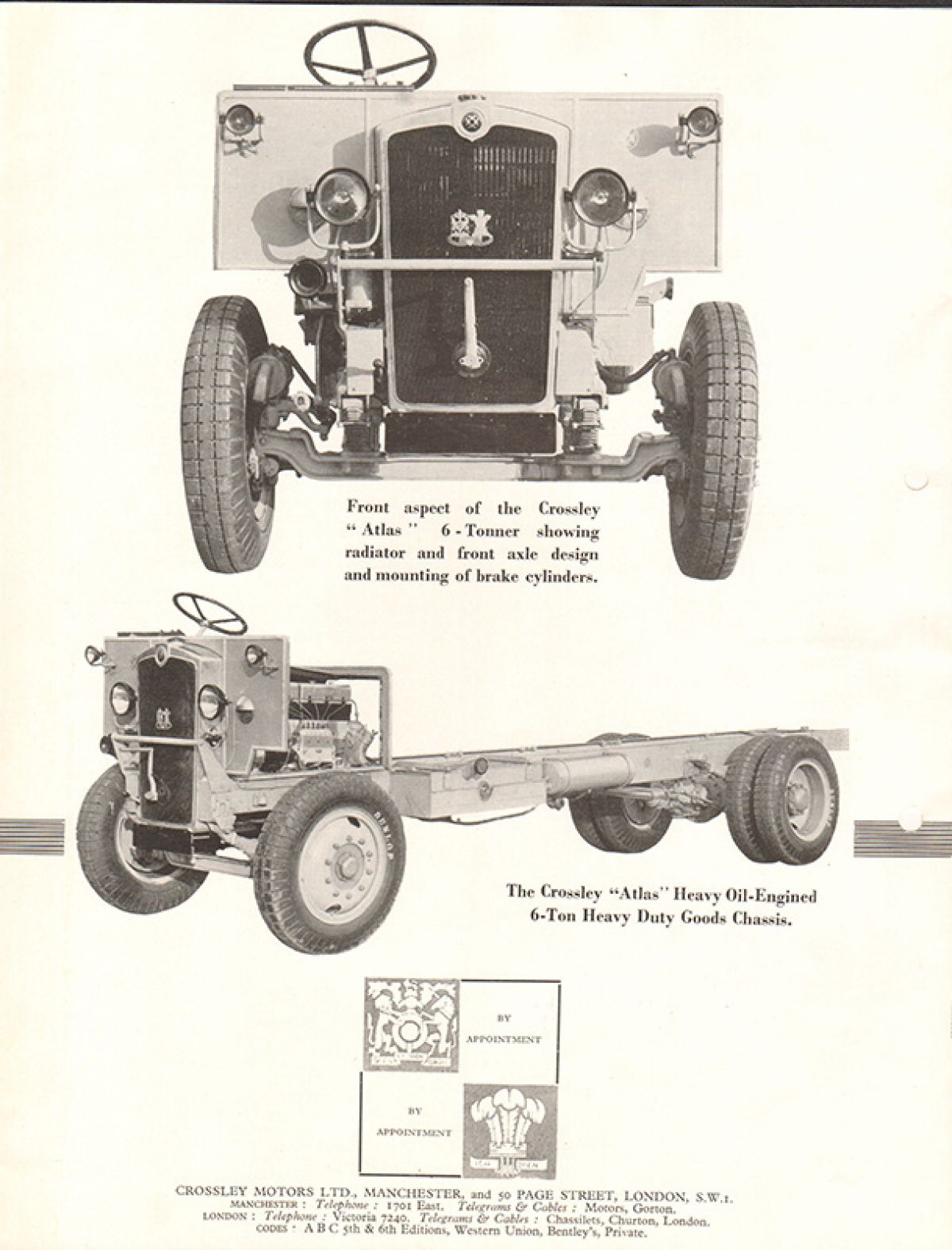 Their prices were around £1,195 (already with the 20% discount offered) for the Atlas model with six-cylinder diesel engine, the VR6 model with 100 hp at 1,700 revs. For an extra £50 you could order the Duplex gearbox with its Overdrive. The Beta model from 4 to 6 tons cost 1,035 pounds, it used the same diesel engine but only four cylinders, with the power reduced to 66 hp. These engines were also used in other models of the brand. Also the Atlas and Beta models had a flat cabin that became fashionable in those years.

The enquiry included a possible version with up to 15 tonnes of payload, to which Crossley's sales department replied that according to English law this was impossible to offer. For a two-axle model it was not possible to reach 12 tons PMA, a three-axle model was limited to 19 tons and only a four-axle model could reach 22 tons PMA... but such a model was not in the brand's offer.

According to the English Crossley Register only a few units of the Atlas model were sold (formally presented a few months earlier under the name Alpha); not many units of the Beta were sold either.

The third company consulted was Foden of Cheshire, in fact a large commercial vehicle manufacturer in those years, offering a fairly wide range of products. The two- and three-axle models received either a diesel engine from Dorman-Ricardo or from the British company Gardner. The most expensive model was the 10-12 tonne three-axle model, offered for £2,015, with a Gardner Diesel 6 L.W engine of 97 hp at 1,550 revs. The amount of 1,550 pounds was requested for the 7 ton model, with only two axles. At a price of £1,475 the 7 ton model with the smaller engine, the Gardner 5L.W 80 PS, was sold, somewhat slower than its big brother. And at 1,350 pounds, the 6-ton model with a 65 hp Gardner 4 L.W engine was sold, all with the same revs. To complete the offer, Foden added the technical data of its smaller model, the 2 ton DD 4/2, with Dorman-Ricardo diesel engine with 44 hp at 2,200 revolutions. Foden mentioned in his letter that he would give a 17.5% discount on these prices.

Extraordinary was the offer made by the Yorkshire Patent Steam Wagon, known for its commercial steam vehicles, from a two-ton model to a 10-ton, three-axle model, manufactured until 1933. After an unsuccessful attempt to offer a gasoline-powered truck between 1911 and 1912, the company returned to steam alternatives in 1933 with the prototype of a modern four-cylinder diesel-engine truck from Dorman-Ricardo. The truck had a very modern look for its time, with a flat cab, and no visible radiator but many air intakes at the front. As an extra, the company also offered a Wilson pre-selection gearbox.

According to the offer presented in February 1934 this truck cost between 1,275 and 1,375 pounds sterling depending on the chosen gearbox; the delivery could be done in eight weeks. Its performance was 75 hp at 2200 revolutions. As the company mentioned in its offer, it had three reasons to produce a diesel engine truck. Firstly, the diesel engine, after years of mistrust in the commercial vehicle sector, had established itself with all its advantages. Second, that at the time the chaos in the UK commercial vehicle industry, due to the Salter Report (this was greater public investment in the development of rail transport as opposed to road transport), with the increase in charges for both road transport and fuel - favoured a more fuel-efficient model. As a third argument, the company mentioned its offer of the new pre-selection gearbox, Wilson patent, with which the driving of a truck was greatly facilitated. In fact, this type of gearbox was also used in rail vehicles.

Yorkshire had its problems in making its product profitable. To manufacture the diesel truck, it had to buy many components from other companies, which did not make it easy to sell at a profitable price. In the end, only about 70 units of this truck were made. And we do not know if any of these trucks were finally delivered to Cape Juby.

Cape Juby became the Protectorate of Spain after negotiations with the French in 1912, who controlled relations with Morocco in those years. After the Cintra agreements in 1958, this territory was officially ceded to Morocco.

If you would like a more extensive report with more photography and details, please contact me via the contact form on this page
You can support me and my articles by donating the amount you want.
I will be very grateful.