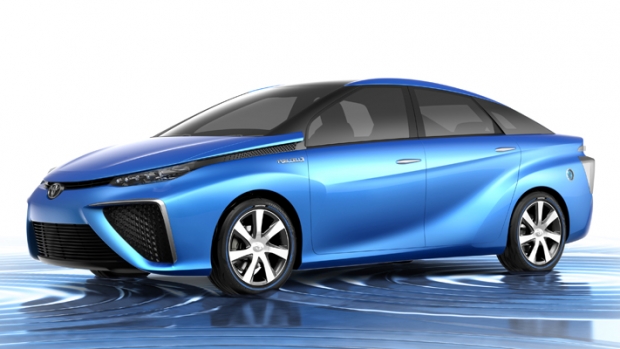 Share
The Toyota FCV Concept, revealed for the first time at Tokyo, previews the fuel cell vehicle Toyota plans to launch around 2015 as a pioneer in the development of hydrogen-powered vehicles.

Toyota´s progressive refinement of hydrogen fuel cell technology has given the car a range of at least 300 miles (500km) on a full tank and a refuelling time of around three minutes – roughly the same as for a petrol or diesel vehicle.

The FCV Concept´s exterior design expresses the key characteristics of a fuel cell vehicle: the transformation of air into water as the system produces electricity; and the powerful acceleration delivered by the electric drive motor. The front end features pronounced air intakes, while an air-to-water theme is captured in the flowing liquid profile of the doors, a wave motif on the filler cap and a rear-end treatment inspired by the stern of a catamaran.

The powertrain features Toyota´s proprietary compact and lightweight fuel cell stack and a pair of high-pressure (70mPa) hydrogen tanks, located beneath the specially designed body. This compact packaging means the FCV can carry up to four occupants.

The Toyota FC stack has a 3kW/l power output density, which is more than twice that of the system previously used in the FCHV-adv concept, and a maximum power output of at least 100kW. It is also equipped with a high-efficiency boost converter. By increasing the voltage, Toyota has been able to make the motor smaller and reduce the number of fuel cells, leading to a system that is more compact overall, yet delivers better performance at reduced cost.

Driving aside, a fully fuelled vehicle can provide enough electricity – 10kW/h – to power an average Japanese family home for a week. The FCV measures 4,870mm long, 1,810mm wide and 1,535mm high. The wheelbase is 2,780mm.