A new hydrogen-powered Toyota could be the answer to keeping the lights on when power cuts strike. […] 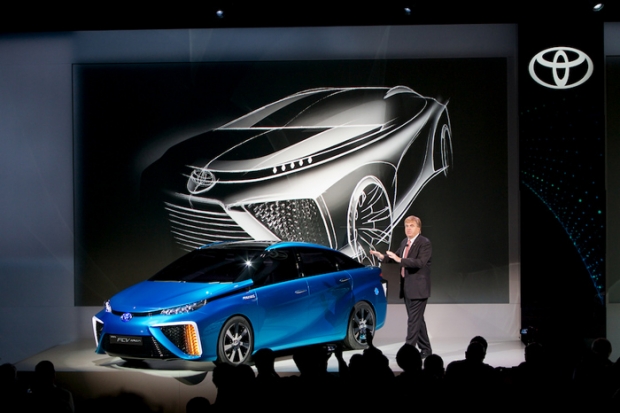 Share
A new hydrogen-powered Toyota could be the answer to keeping the lights on when power cuts strike. Instead of fumbling for the candles when the electricity supply fails, owners of the new Toyota FCV could simply reach for their car keys to keep their homes warm and bright.

The FCV, due to make its world sales debut next year, is demonstrating its potential as a back-up domestic energy supplier at the Consumer Electronics Show in Las Vegas this week.

The four-door saloon’s electric motor can produce more than 100kW and, with a full tank of hydrogen fuel, could generate enough energy to power a regular home for a week. Engineers are now researching an external power supply device that could be used with the car to provide a safe and simple domestic connection.

The FCV’s potential as an emergency power supply is of course secondary to its principal role as a practical, zero-emissions vehicle. Benefitting from Toyota’s extensive hydrogen fuel cell research and development, it has a range of at least 300 miles on a full tank, and can be refilled just as quickly and safely as a conventional petrol or diesel model. When driven, the car’s only tailpipe emission is water, the by-product of the fuel cell system’s electricity generation process.

Toyota has made its hybrid vehicles central to its research into developing low-carbon homes, integrating the rechargeable Prius Plug-in into its “smart grid” housing developments in Toyota City and in a pilot project which ran last year in the Indianapolis region in the USA.  Unofficially, Toyota hybrids have already proved their worth as mobile power stations, notably with Prius models being drafted in as emergency energy sources in the aftermath of the Japan earthquake and tsunami in 2011.