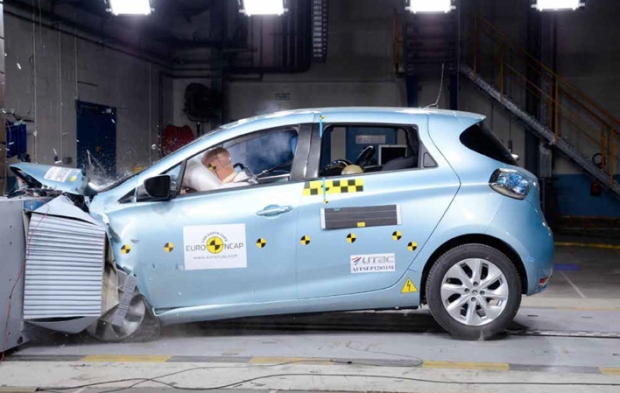 5 stars and Best in Class for Renault Zoe

Share
The annual ‘best in class cars’ tables just published by the independent body Euro NCAP lists Renault ZOE as the best supermini (electric and internal combustion-engined cars combined) of all those it evaluated last year in terms of safety performance. This accolade, which comes on top of the maximum five-star rating achieved by the model in March 2013, stands out as further reassurance for ZOE’s customers and an eloquent reward for Renault’s safety engineering experts.

In the course of Renault ZOE’s development, the mission not to compromise on safety in any way could not have been clearer. The objective was for the new 100%electric hatchback car to be as safe as the brand’s internal combustion-engined models. It consequently benefited fully from Renault’s extensive expertise and know-how in the realms of passive and active safety. From its initial design to its exhaustive testing phase, nothing was left to chance. In addition to Euro NCAP requirements, careful attention was paid to two areas that are specific to electric vehicles, namely their battery and the very little noise they make when running.

Given that batteries are as sensitive as a conventional fuel tank, safety specialists focused particularly on this part of the car. ZOE’s battery casing was reinforced to protect the modules inside, while the wiring was routed to prevent the risk of damage. The battery itself was subjected to a comprehensive range of tests, including exposure to flames, immersion, combustion, electrical overload, short circuiting, compression, dropping from a height and the so-called ‘nail penetration test’ (which involves driving a nail into a cell). Following the car’s crash test, the battery remained intact but an automatic circuit breaker was incorporated in the system as an added precautionary measure.

Meanwhile, electric vehicles make very little noise at speeds of up to 18 mph, so ZOE is equipped with Z.E. Voice, which warns pedestrians and other road users of the vehicle’s approach when it is travelling from 1 to 18 mph (at a standstill, the car is completely silent).

This sound was custom engineered to achieve an identity that mirrors ZOE’s character and was developed in association with sound perception and design specialists from France’s Acoustic/Music Research and Coordination Institute (IRCAM). Drivers can actually choose from three different sounds, dubbed ‘Pure’, ‘Glam’ and ‘Sport’. They are also free to cut the sound at the press of a switch, although it automatically resumes the next time they turn on the car on.

Between the top archievers that gained the highest overall scores, calculated from the results achieved in adult, child, pedestrian protection and safety assist test are the Qoros 3 Sedan in the "small familiy" class, the first Chinese car to archive the highest five star rating - a car that possibly will get an hybrid transmisión later one -, and the Lexus IS300h in "Large Family" class, an electric/hybrid car.