The Golf GTE is due to make its debut at the Geneva Motor Show next month.  It provides the fifth […] 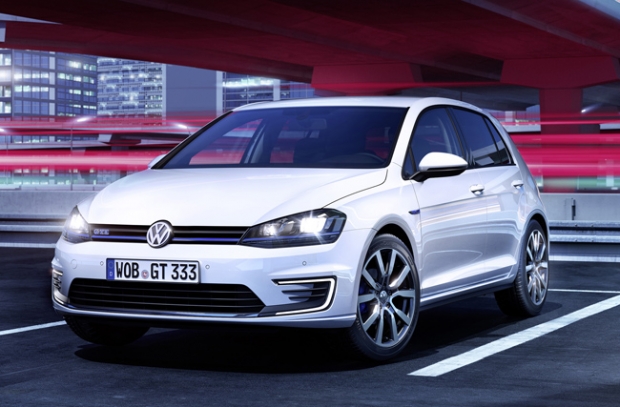 Share
The Golf GTE is due to make its debut at the Geneva Motor Show next month.  It provides the fifth variety of drive type for the Golf, which is now available with petrol, diesel, natural gas (not in the UK), electric and hybrid power.  The name of the Golf GTE reflects its position in the line-up alongside the iconic petrol-powered GTI and the diesel GTD.  Where ‘GT’ stands for ‘Gran Tourismo’, ‘I’ stands for ‘Injection’, ‘D’ for Diesel and ‘E’ for Electricity.

The Golf GTE is driven by two engines: a 1.4-litre 150 PS TSI direct-injection petrol engine and a 102 PS electric motor.  Together, they combine to produce power of 204 PS and a theoretical range of around 580 miles.  Using the electric motor alone, the GTE is capable of speeds of 81 mph.  With the TSI engine as well, the Golf GTE can sprint from zero to 62 mph in 7.6 seconds and on to 135 mph.  Torque is a remarkable 350 Nm (258 lbs ft).  Alongside this impressive performance, the Golf GTE offers impressive fuel efficiency, with a combined cycle figure of 188 mpg* and CO2 emissions of 35 g/km* (*provisional data).

In pure electric mode (activated at the press of a button), the Golf GTE can travel up to 31 miles, depending on conditions, and the electric power can also be saved – for example when driving to a zero-emissions zone.  The 8.8 kWh lithium-ion battery can be charged in around three and a half hours from a domestic mains outlet, or two and a half hours from a domestic wallbox.  The battery weighs 120 kg, giving the GTE a total kerbweight of 1,520 kg.

The Golf GTE uses a six-speed DSG gearbox with a triple-clutch system specially developed for hybrid vehicles.  The electric motor is integrated into the gearbox housing, while further hybrid components include power electronics and a charger.  An electro-mechanical brake servo and an electric air conditioning compressor make for energy-efficient braking and air conditioning.

The GTE will also feature an e-manager which allows the driver to preset vehicle charging, as well as interior cooling or heating.  These functions can also be operated remotely using the Volkswagen Car-Net app on a smartphone: a three-year subscription will be included in the UK.