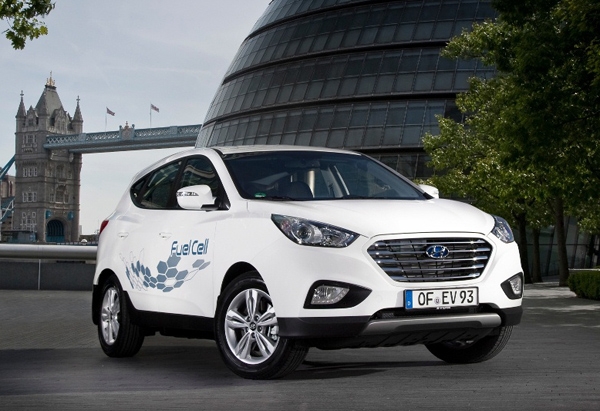 Share
Hyundai Motor’s ix35 Fuel Cell has been selected for the third consecutive year by the European Commission-backed Fuel Cells and Hydrogen Joint Undertaking (FCH JU) to demonstrate the real-world benefits of hydrogen fuel cell technology. Two examples of the ix35 Fuel Cell, the world’s first mass production fuel cell electric vehicle (FCEV), will be driven during 2014 by Members of the European Parliament (MEPs), European Commissioners, EU officials and other policymakers in the EU.

Examples of the Hyundai ix35 Fuel Cell are already being leased by public and private fleets, primarily in Europe, where the European Union has established a hydrogen road map and initiated construction of hydrogen fuelling stations. Public authorities in Denmark, Germany, Norway and Sweden, as well as private fleets in France, Denmark and Finland, have already taken delivery of ix35 Fuel Cell cars.

In April 2014, Hyundai Motor announced its plan to deliver 75 units of ix35 Fuel Cell as part of the largest ever pan-European fuel-cell passenger car project. The Hydrogen for Innovative Vehicles (HyFIVE) project, funded by FCH JU, will see deliveries made in Bolzano (Italy), Copenhagen (Denmark), Innsbruck (Austria), London (UK), Munich and Stuttgart (Germany). As part of the project, the existing pan-European refuelling infrastructure will be expanded significantly, providing greater choice and convenience to early adopters of FCEV technology.

The Hyundai ix35 Fuel Cell represents the culmination of an FCEV development programme that began in 1998, and continues at the company’s dedicated fuel cell research centre at its Eco Technology Research Institute in Korea. In January 2013 the company became the world’s first automaker to begin mass production of zero-emission, hydrogen-powered vehicles, underlining its position as a world-leader in the development of fuel cell technology.

The Fuel Cells and Hydrogen Joint Undertaking (FCH JU) is a unique public private partnership supporting research, technological development and demonstration (RTD) activities in fuel cell and hydrogen energy technologies in Europe. Its aim is to accelerate the market introduction of these technologies, realising their potential as an instrument in achieving a carbon-lean energy system.

The three members of the FCH JU are the European Commission, fuel cell and hydrogen industries represented by the NEW Industry Grouping and the research community represented by Research Grouping N.ERGHY.