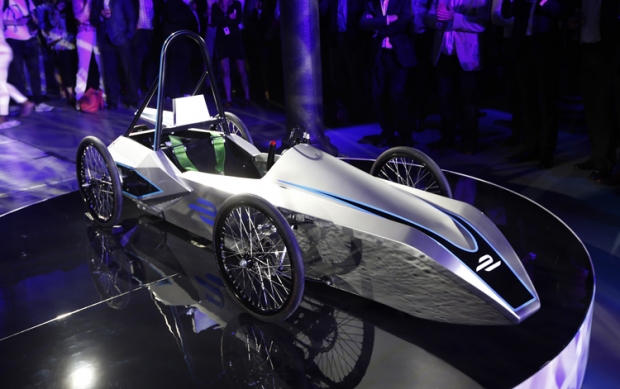 Share http://www.greenpower.co.uk
Greenpower Education Trust is teaming up with the FIA’s innovative new Formula E race series, running the Formula E School Series. The deal will see aspiring engineers compete in a series of televised support races at five of the 10 Formula E races in 2014/2015.


Events at Buenos Aires (Argentina), Long Beach and Miami (USA), Berlin (Germany), and London (UK) will give local students the chance to pit their wits against rival teams by constructing and driving electric Formula E School Series cars on the same circuits as the advanced Formula E racers. Ten School Series teams will participate at each round of the series, which will feature a 20-minute qualifying session between the official Formula E Practice and Qualifying sessions and will culminate in a 20-minute sprint race ahead of the Formula E ePrix.

Greenpower Education Trust chief executive, Jeremy Way, and CEO of Formula E Holdings Limited, Alejandro Agag Longo, took the wraps off the new School Series car at the media launch event in London. Mr Way said: “Formula E is the most exciting motorsport innovation in a generation and could not only revolutionise the way people view the sport, but also greatly enhance the advances being made in the development of electric and sustainable automotive engineering.

“The values and objectives that underpin Formula E mirror exactly our own aims; we have been promoting the advancement of sustainable motoring and engineering in the UK’s schools and universities for 16 years and we are delighted that we can now take our initiative on to a global stage.”

School Series participants will build and race the standardised cars in year 1, which are developments of Greenpower’s existing F24 and F24+ machines and already used by 12 to 24-year-olds to compete in events across the UK. The Formula E support series cars feature bespoke bodywork and livery, an energy efficient data logger and revised sprint race gearing.

The Greenpower Education Trust charity was established in 1999 to encourage youngsters to follow careers in sustainable engineering and technology and will run 25 races in the UK during 2014. With three classes to choose from and age groups ranging from junior level to graduate standard, the races encourage individuals to learn and develop their engineering skills in a fun and competitive environment.

More than 500 schools participate in Greenpower with many integrating it into their core educational delivery programme and more than 9,000 students choose to spend their free time competing in the various series. Teams use their technical know-how to optimise the performance and endurance of the stock Greenpower components, an electric motor and battery pack, within the specified regulations. Greenpower hosts its National Final at Goodwood Motor Circuit every October, which is a free event typically attended by up to 10,000 people. Greenpower currently has sponsorship opportunities available to appropriate companies to help support in its objective of growing participation in the UK to 1,000 schools by 2016.

Formula E is the world’s first fully-electric professional racing series. It will race in 10 major cities on street circuits designed to take in their most iconic landmarks. For its inaugural season, which begins in September 2014 and ends in June 2015, the championship has attracted big names from the motorsport world to participate in both team and driver capacities.

Andretti, Virgin Racing and Audi Sport Abt will all field two-car teams, while Le Mans legend Stephane Sarrazin and a host of ex-F1 drivers including Jarno Trulli, Bruno Senna, Nick Heidfeld, Takuma Sato and Christian Klien have all signed up to the Drivers’ Club.

- Greenpower is a leader in promoting careers in engineering and the most accessible route into green motorsport. The School Series support races are planned for all 10 Formula E events in 2015/2016.
- Siemens, The IET, Silverline Tools and Ford and a variety of other sponsors already throw their weight behind the work that Greenpower achieves.
- Businesses including Jaguar Land Rover, MIRA and Prodrive allow their graduates and apprentices time to compete, as they see the relevance of Greenpower to building the skills base of their organisations.
- Patrons include The Earl of March, David Richards CBE and Viscount Linley.
- Classes include Goblins (9-11 yrs), Formula 24 (11-16 yrs), Formula 24+ (16-25 yrs).