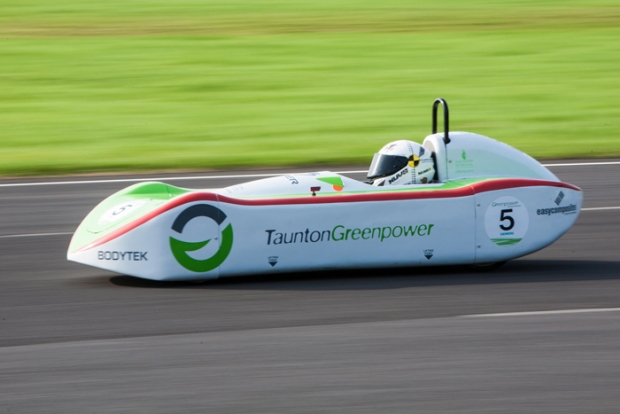 Share http://www.greenpower.co.uk.
The Greenpower Education Trust charity will hold its first ever International Final at Goodwood Motor Circuit on this Sunday, October 12.

More than 100 teams of aspiring young engineers - ranging from secondary school level to graduates from all over the globe - will compete in three of Greenpower's race categories in the 16th running of the charity's season finale, which is free to visit.

With 87,000 new engineers a year required to sustain the UK industry to 2020 (a total of about 1,86 million new people), Greenpower runs a series of learning-based activities designed to get young people inspired to consider engineering as a career. Currently working with 500 schools, colleges and universities and 9,000 students in the UK, Greenpower aims to double domestic participation by 2020, while its number of international participants has increased, with teams from America, South Africa and Europe.

Leading the international charge will be the newly-formed Team USA, a project backed by engineering and electronics giant, Siemens, a long-time partner and supporter of Greenpower's work. Greenpower will run its first ever International Final, at Goodwood Motor Circuit, which will host more than 100 competing teams from across the UK, the USA, South Africa, Poland, Portugal and Ireland.

The Greenpower initiative was named as the official education partner to the new-for-2014 FIA Formula E Championship earlier this year; Greenpower will work with schools in each of the cities visited by Formula E between January and June 2015, running support races at each round and giving it a truly global platform from which to expand internationally.

The Formula E support race car will be on display at the International Final as part of a 'Science and Engineering Fair', which will host interactive stands from various institutions and engineering companies, including Siemens and Nissan.

In keeping with the core sustainable engineering theme of Greenpower, Nissan will exhibit its pioneering, all-electric LEAF Nismo RC racing car and TV's 'face of technology', Jason Bradbury, will commentate on proceedings as well as presenting the trophies at the end of the on-track competition.

There will be an opportunity for the youngest guests to try out a Greenpower Goblin category car, designed and built by one of the many primary schools taking part in the Greenpower 'ladder' of championships and a presentation will be given for schools interested in participating next season.

The International Final will feature the finale of the IET Formula 24 and IET Formula 24+ seasons, as well as the Greenpower Corporate Challenge, which features teams from businesses including Jaguar Land Rover, Prodrive and Lockheed Martin.

Siemens is developing a Global Technology Partnership with Greenpower to support the global expansion of the initiative, with recent progress in several new territories - a delegation of teachers from Belgium and China is expected to attend the International Final in order to see first-hand how they might set up the Greenpower Challenge in their own countries.

Meanwhile, students from the Mandela School of Science & Technology from Mvezo, South Africa, which is also supported by Siemens, will be competing; it will be the first time that any of the students have travelled outside of South Africa.