Detroit Electric has revealed the unique and innovative design of its first flagship store, which […] 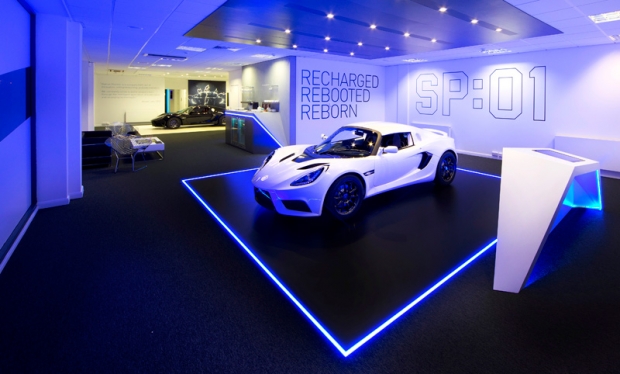 Share http://www.detroit-electric-group.com
Detroit Electric has revealed the unique and innovative design of its first flagship store, which has been constructed on the same site as the company’s dedicated production facility in Europe.

The distinctive dealer showroom design concept harmonises with the clean and futuristic styling of the marque’s debut production model, the exciting SP:01 pure-electric sports car, which will soon begin production at the plant in Leamington Spa, UK.

Clever interior details in the flagship store include reception and office furniture with clean lines, some seemingly cast in concrete for a thoroughly modern, industrial look, but which are then complemented and softened by recognisably classic modern furnishings such as Corbusier sofas and leather-and-chrome Marcel Brueuer Wassily chairs.

Customers will be able to ‘build’ their own SP:01 on large touchscreen displays in the showroom to unique, bespoke specifications, before discussing their vehicles in detail with Detroit Electric staff in a dedicated, exclusive customer area in the store.

“Laying down this showroom marker is an important step as we gear up to the start of production of our first model and prepare to roll it out to our first dealers in Asia and Europe,” said Albert Lam, Chairman and CEO of Detroit Electric.

“Our flagship store design reflects the pioneering design and technology values of a brand that can trace its roots back to 1907 – now revived a little over a century later,” he added. “The showroom is a visually-arresting and stylish environment where a customised lighting theme literally highlights our ‘pure-electric’ clean power product proposal.”

Detroit Electric is an iconic brand in the global electric vehicle sector. It was introduced in 1907 by the Anderson Electric Car Company and soon established itself as the market leader and most prolific manufacturer of electric cars. Detroit Electric was revived in 2008 by Albert Lam, former Group CEO of the Lotus Engineering Group and Executive Director of Lotus Cars of England, with a vision to produce an electric vehicle that seamlessly integrates refined aesthetics, innovative technology and superior handling and performance.

Detroit Electric has jointly developed with Geely Automobile Holdings Ltd a pure electric sedan that will be assembled by Geely in 2015 for sale in China and other countries and territories worldwide.

The company has its global headquarters on the 18th floor of the landmark Fisher Building, located in downtown Detroit, USA, which is the company’s financial headquarters and will be the centre for overseeing activities in North America.

Detroit Electric has also invested in a new European headquarters, located in Houten, Netherlands, where the company has already recruited a new team to manage the brand’s Sales and Marketing activities including vehicle sales, customer service and marketing in the region.