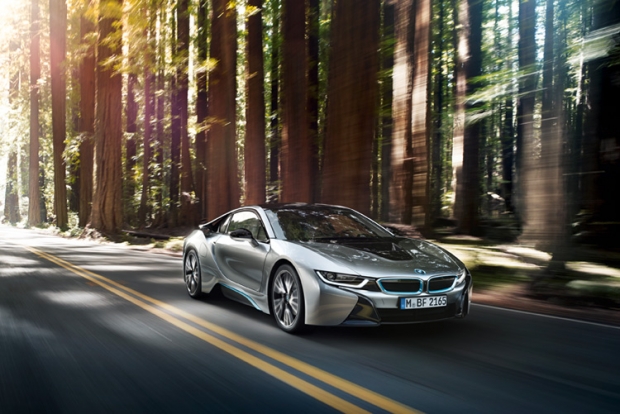 Share
For the second time in succession BMW i clinched victory at the World Car Awards in the category World Green Car. Following the success of the purely electrically driven BMW i3 the previous year, the BMW i8 was awarded this prestigious award at the New York International Auto Show.

The sports car's combination of groundbreaking plug-in hybrid drive technology and innovative lightweight construction together with its avant-garde design was honoured by the international jury at the World Car Awards. The BMW i8 was also one of the finalists in the category World Luxury Car at the World Car Awards 2015, thereby underlining its special position.

“I am delighted to accept this award on behalf of the team in Munich,” said Dr. Ian Robertson, Member of the Board of Management of BMW AG, responsible for Sales and Marketing BMW, speaking at the Award Ceremony in New York. “The BMW i8 represents the future with its unique lightweight construction and unrivalled connectivity. To win this award for the second year in a row shows that our BMW i products are truly leading the world.”

The BMW i8 is the first plug-in hybrid vehicle manufactured by the BMW Group. It combines the performance of a sports car with the fuel consumption and emission figures of a subcompact vehicle. The BMW i8 can be driven up to 37 kilometres under electric power alone, accelerate in the style of a purebred sports car and yet its average consumption is that of a subcompact car. Its 1.5-litre three-cylinder petrol engine, equipped with BMW TwinPower Turbo technology, is combined with an electric motor. The battery can be charged at a conventional power outlet, at a charging station or simply while driving. The system performance of the BMW i8 is 266 kW/362 hp and it accelerates in just 4.4 seconds to 100 km/h from a standing start (combined fuel consumption: 2.1 l/100 km; combined CO2 emissions: 49 g/km)*.

The extensive use of innovative materials, as well as the i8's energy-efficient production processes also underline the overall, future-oriented concept. The optional laser headlights and the services developed specifically for electro mobility by the BMW ConnectedDrive team are further proof of the progressive direction taken by the BMW i8.

Since 2005, the World Car Awards have been presented annually at the start of the New York International Auto Show and are among the most important international prizes to be won in the automotive sector. The jury is composed of 75 journalists from more than 20 countries. Each summer before the award ceremony, the models nominated in each category are announced, from which an Expert Committee or the jurors nominate five vehicles in each category (World Car Design of the Year and World Green Car) or ten vehicles (World Car of the Year, World Luxury Car, World Performance Car). From these, the jury selects the three finalists in the run-up to the Geneva Motor Show, before the winners are finally announced in New York.

The BMW i8 is the BMW Group's third model to be honoured with the World Green Car Award at the World Car Awards, following the BMW 118d in 2008, which represented the BMW EfficientDynamics development strategy, and the BMW i3 the previous year.