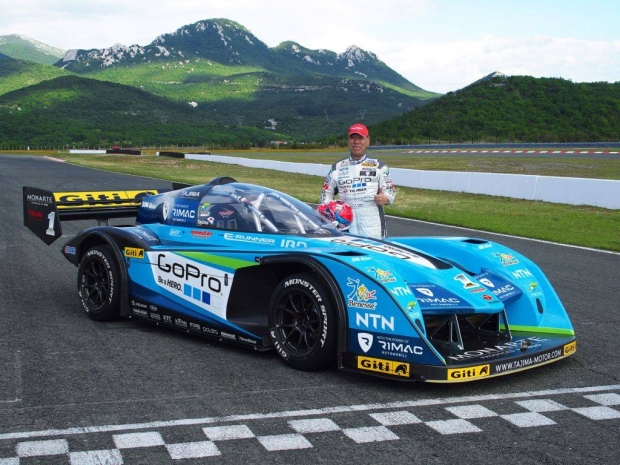 Share
TeamAPEV‬ with MONSTER SPORT, led by the racing legend Nobuhiro “Monster” Tajima, teamed up with Rimac Automobili. As a result, 2015 Pikes Peak International Hill Climb Race will have a new 1.1 MW beast at the starting line, the Tajima Rimac E-Runner Concept_One.

Rimac Automobili are once again showing their vigorous racing DNA taking the challenge in one of the most prestigious races in the world. Mr. Tajima’s decades long experience in racing and Rimac Automobili’s state of the art technology and know-how brought to life a staggering creation, the Tajima Rimac E-Runner Concept_One. It is powered by four independent electric motors, giving the car a total power of over 1,1 MW (1,475 HP). That is more than twice the power Mr. Tajima had in his 2014 car when he broke his own Pikes Peak record, stopping the clock at 9:43,90.

There are no gearboxes or differentials on this car. The power of each independent motor is transferred to each wheel by an innovative chain drive system developed specifically for this project, which saves a lot of weight and space. Embracing the Rimac Automobili technology, the Tajima Rimac E-Runner Concept_One features an adapted racing version of the Rimac All Wheel Torque Vectoring system, first implemented in the Rimac Concept_One. The Rimac AWTV controls the torque of each motor 100 times a second. The system can vary the torque on each wheel depending on the steering angle, speed, longitudinal and lateral forces, yaw-rates and number of other variables. The ECU runs the collected sensor-data through complex mathematical algorithms which calculate the optimum torque distribution on a millisecond-level. This enables the vehicle to take full advantage of the tires, squeezing the maximum out of their potential and giving the driver the desired vehicle dynamics at any given moment. Mr Tajima will thus have both the 1,1 MW of power and maximum grip in each of the Pikes Peak’s 156 corners.

“We measured 0-100 km/h in 2,2 seconds. 200 km/h comes in 5,4 seconds from a standstill. Cornering forces and stopping numbers are also impressive, but let’s not spoil the surprise. We are quite confident that Tajima Rimac E-Runner Concept_One will break previous year’s record. He is a great driver with tons of experience. Interesting fact – he raced Pikes Peak his first time a year before I was born. 28 years later, we work alongside to push the limits further. With the support of our best engineers and technicians, our technology, powertrain, battery-system and Torque Vectoring, he will be able to push the boundaries of electric race cars to a whole new level. Working with Mr. Tajima and his team is an amazing experience of which we enjoy every second.” reveals Mr. Rimac.

“The Pikes Peak is one of most difficult hill climbs in the world, because it is held on a public road, not a race track. The conditions are constantly changing. We want to develop technology and gather experience from the Pikes Peak race for development of better, safer, and zero emission road cars. This is my aim. Rimac Automobili is a quite young company but their mind and their spirit are fantastic. The level of technology, professionalism and vertical integration that this company has managed to achieve in such a short time amazed me. I am very happy because Rimac Automobili is simply the best partner for Team APEV.” said Mr. Tajima after the initial testing in Croatia.

The Pikes Peak hill climb is 19,9 km long and ends up at 4,301 m above sea level. Petrol engines have oxygen starvation problem at that altitude - the power of the engine decreases over 40 percent. However, electric motors don’t use oxygen, so Mr. Tajima will have the full power of all four electric motors available from start until the finish line.