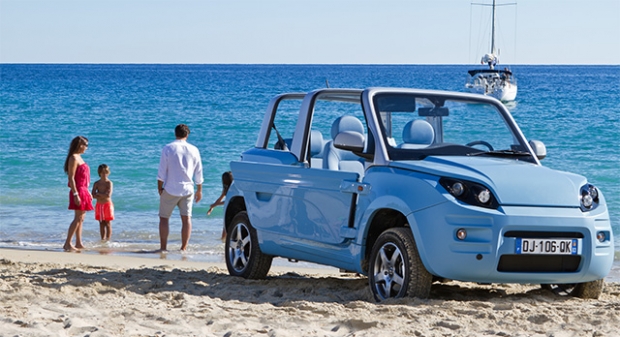 Share http://www.bluesummer.fr
The PSA Group signs a contract with the French Bolloré Group to built one of their electric vehicles, in this case the Bluesummer convertible. Renault also signed a contract with this company to built the Bluecar Sedan. So it seems these electric vehicles are very attractive for the big groups. http://www.prestigeelectriccar.com/news-1546-Renault_starts_assembling_Bollore_Bluecar

Covering vehicle production and distribution as well as car sharing, the strategic cooperation agreement between Bolloré and PSA Peugeot Citroën reflects the two groups' shared commitment towards sustainable mobility. It is also aligned with their common goal of becoming a leading player in the car sharing market, which will account for a significant portion of the new mobility economy, alongside public transport solutions.

The electric vehicle that will be distributed by PSA Peugeot Citroën is the Bluesummer, a four-seat cabriolet designed by Bolloré, with an urban driving range of 200 kilometres.

On the production side, the agreement also provides for the assembly of Bluesummer cars at PSA Peugeot Citroën plant in Rennes from September 2015, with installed capacity of 15 vehicles per day for a maximum of 3,500 vehicles per year.

To further their commitment to sustainable mobility, the two groups will also cooperate in the area of car sharing – initially in Europe and later via the creation of a joint venture designed to deploy car sharing solutions worldwide using electric vehicles (passenger cars and commercial vehicles), as well as low-emission internal combustion vehicles.

Who is the Bolloré group: Founded in 1822, Bolloré is one of the 500 largest companies in the world. The stability of its shareholding allows the Group to develop a long-term investment policy. It now holds strong positions in all its activities around three business lines: transportation and logistics, communication and media, and electricity storage and solutions. 2014 key figures: 56,000 employees in 155 countries, €10.6 billion in turnover, €403 million in net income, and €9,806 million in shareholders' equity