Hyundai Motor has unveiled the hybrid version of its new IONIQ – an advanced, alternative-fuel […] 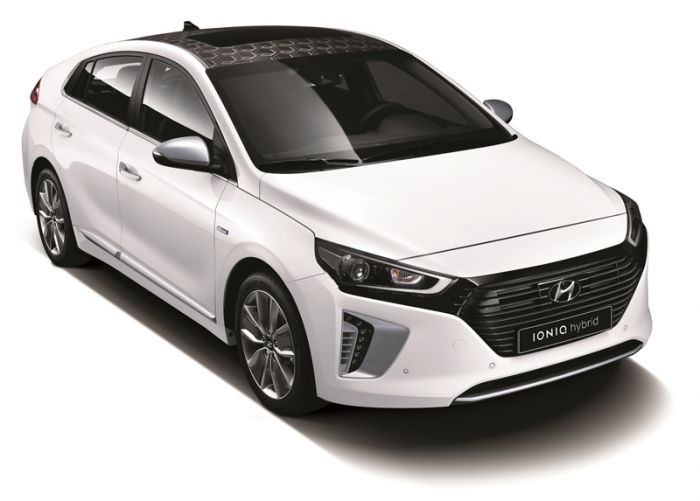 Share
Hyundai Motor has unveiled the hybrid version of its new IONIQ – an advanced, alternative-fuel compact vehicle. The IONIQ will be available with a choice of three powertrains unmatched by any other car in the world: electric; plug-in gasoline/electric hybrid; and gasoline/electric hybrid. All three versions will be unveiled at the 2016 Geneva Motor Show in March.

The IONIQ Hybrid responds to rapidly changing customer lifestyles by breaking the mould for hybrid vehicles. It not only offers class-leading fuel efficiency but also a fun, responsive drive and attractive design – a unique mix not yet achieved by a hybrid vehicle.

The IONIQ Hybrid is equipped with a newly developed, dedicated 1.6 GDI four-cylinder Kappa engine and a 32 kW (44 PS) electric motor, which is fed by an advanced Lithium-Ion polymer battery. The two powertrains have combined maximum output of 104 kW (141 PS) and 265 Nm (27 kg.m) of torque. A new six-speed dual-clutch transmission (6DCT) provides responsive performance and a slick gear shift, resulting in an entertaining drive, and good fuel economy.

Based on an exclusive new platform, the driving performance of the IONIQ is similar to that of a regular compact car, thanks to its responsive hybrid powertrain. Ride and handling as well as noise, vibration and harshness levels are specially tuned to contribute to a superior ride quality as well as being quiet and comfortable on long journeys.

Developed to strive for the world’s highest hybrid fuel efficiency without compromising the driving performance, the IONIQ Hybrid is equipped with a newly developed, dedicated 1.6 GDI four-cylinder Kappa engine. The 1.6 GDI powerplant delivers 77kW (105PS) at 5,700rpm while providing maximum torque of 15.0kg.m (147Nm) at 4,000rpm. It is combined with a newly developed, very efficient six-speed dual-clutch transmission (6DCT) and, in collaboration with the 32kW (43.5PS) electric motor, offers a maximum output of 103.6kW (141PS) at 5700rpm and 27.0kg.m (265Nm) of torque in first gear 24.0kgf.m / 235Nm in second to sixth.

The IONIQ Hybrid and Plug-in hybridboth feature a six-speed dual-clutch transmission (6DCT), which boasts best-in-class transfer efficiency through the use of low-friction bearings and low-viscosity transmission oil.

Capitalizing on the latest generation of transmission technology, the IONIQ achieves its unique mix of driving performance and excellent fuel efficiency through intelligently set gear ratios combined with a sophisticated shift strategy, which transfers power smoothly from gear to gear.

The 1.6 GDI engine is accompanied by a 32kW (43.5PS) electric motor, which also adds another 17.3kg.m (170Nm) to the system at maximum output. It enables the IONIQ Hybrid to operate in pure electric mode at speeds up to 120kph, maximizing efficiency and minimizing CO2 emissions.

The electric power is generated by a permanent magnet synchronous motor and was specifically developed for world-class efficiency. To achieve this, parts of the motor were optimized by reducing the thickness of core components (electrical steel sheet) by up to 10% and adopting rectangular-section copper wire to decrease core and copper loss.

Hyundai Motor engineers decided to use a Lithium-Ion polymer battery pack for the IONIQ Hybrid - instead of conventional nickel-metal-hydride batteries. This provides lower memory sensitivity, excellent charge / discharge efficiency and an outstanding maximum output. Efficient packaging was also taken into consideration as the battery system is located underneath the rear seats so that the usability of the passenger cabin and cargo area is entirely uncompromised.

The complete set of hybrid powertrain components was designed to be very compact and highly efficient. The combined extra weight of the hybrid technology therefore only adds minimal additional weight to the IONIQ but, significantly increases its efficiency.