The tradicional German branch Borgward presents at Geneva Motor Show two new models, both of them […] 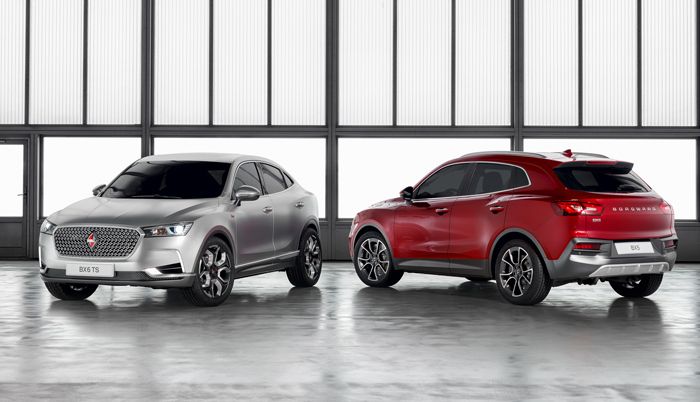 Borgward back with hybrid models

Share http://www.borgward.com
The tradicional German branch Borgward presents at Geneva Motor Show two new models, both of them available as hybrid cars, and one as a 100% electric car in the near future.

Equipped with the very latest in plug-in hybrid technology, both the BX5 and the PROJEKT BX6 TS deliver an outstanding performance combined with extremely low fuel consumption and emissions. The powertrain of the multitalented BX5 is largely the same as that installed in the larger BX7, which celebrated its world premiere at last year’s IAA International Motor Show. It comprises a turbocharged, direct-injection, 1.4-litre, four-cylinder engine delivering 105kW (143 hp) together with an 85 kW (115 hp) electric motor. The range under electric power is 55 kilometres.

The four-cylinder engine drives the front axle via a seven-speed dual-clutch transmission. Powering the rear axle is an electric motor with integrated kinetic energy recovery system (KERS), linked to the front drive unit via a sophisticated control system. This intelligent AWD system applies torque to the electric rear axle by means of a “virtual drive shaft”, whenever the demands of energy efficiency, handling dynamics or driving safety require. At the same time, during deceleration or braking, the system regenerates kinetic energy, with which to recharge the batteries.

The BORGWARD PROJEKT BX6 TS is a completely different character. This model showcases the performance potential of the BORGWARD concept. Here, too, developers have opted for a turbocharged, direct-injection, four-cylinder engine—this time, however, with 2.0-litre capacity and power of 200 kW (240 hp). This, in turn, is coupled with a performance-enhanced electric motor delivering 110 kW (150 hp). If required, the combined muscle of these two power packs will deliver vigorous acceleration and propel the PROJEKT BX6 TS to the performance level of a highly tuned sports car. On the other hand, it is also perfectly capable of meeting the demands of a modest fuel economy when driven in the E-Cruising mode.

In fact, the plug-in hybrid features a choice of eight different driving modes. These are activated either automatically or manually, via the push/turn controller on the central console, and are displayed as activated in the media touchscreen and cockpit display. In addition to standard plug-in hybrid driving modes such as energy recuperation, pure electrical power and boost, the multitalented BORGWARD BX 5 also features an off-road program to increase performance on challenging terrain.

The group remains fully committed to its objectives: sales to rise to over 500,000 units a year in the medium term; and market launch in German-speaking countries to take place at the end of 2017. “We only start with plug-in hybrids and purely electric vehicles on the German and other European markets, and these at attractive prices”, said Walker. The purely electric vehicles will have a highly competitive range of over 250 kilometres. In addition BORGWARD is aiming for an initial public offering in Frankfurt within the near future.