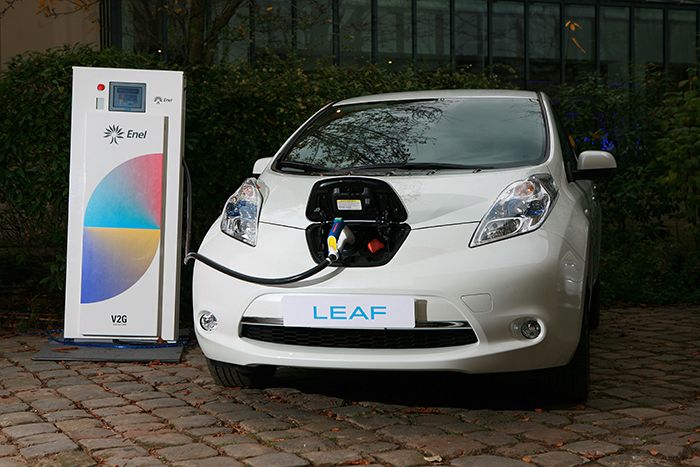 Share
Automotive industry leader Nissan and multinational power company Enel, today confirmed plans to launch a major vehicle-to-grid (V2G) trial – the first ever carried out in the UK. The trial will work by installing and connecting one hundred V2G units at locations agreed by private and fleet owners of the Nissan LEAF and e-NV200 electric van. By giving Nissan electric vehicle owners the ability to plug their vehicles into the V2G system, owners will have the flexibility and power to sell stored energy from their vehicle battery back to the National Grid.

Paul Willcox, Chairman of Nissan Europe, said: “Today’s landmark trial in the UK is a significant step forward in renewable energy management, helping shape the future of  industries, cities and societies. Smart energy management is one of the biggest challenges any nation faces for the future which is why this trial is so critical in assessing the feasibility of using variable, more flexible energy sources. We see Nissan electric vehicles as being the mobile energy hubs of the future, pioneering a self-sustaining energy infrastructure that will help solve the capacity issues of the future.”

“This is the first time this has ever been done in the UK and by enabling customers to sell energy back to the grid, we’re providing a financial incentive to choose the sustainable option.”

This endeavour is part of Enel and Nissan’s commitment to support the entire EV ecosystem, going beyond the car itself and delivering new services to the energy industry.  Moreover, there will be an increasing number of EVs on the roads across Europe in the future and it is vital that V2G technology is rolled out to ensure the grid can satisfy the demands made upon it for increased energy.

Currently if all 18,000 Nissan electric vehicles in the UK were connected to the energy network, they would generate the equivalent output of a 180 MW power plant. If that was scaled up in a future where all the vehicles on UK roads are electric, vehicle-to-grid technology could generate a virtual power plant of up to 370 GW. This energy capacity would be enough to power the UK, Germany and France.

V2G technology allows electric vehicles to be fully integrated into the electricity grid and will help improve grid capability to handle renewable power, making renewable sources even more widely integrated and affordable. V2G charging infrastructure developed by Enel gives private EV owners and businesses with large EV fleets the opportunity to create mobile energy hubs by integrating their vehicles into the grid. The system works by allowing Nissan EV owners to connect to the grid to charge at low-demand, cheap tariff periods, with an option to then use the electricity stored in the vehicle’s battery at home and at work when costs are higher, or even feed back to the grid which could generate additional revenue for the EV owner.

Today’s announcement follows the signing of a partnership agreement between Nissan and Enel in Paris in December 2015 during the 21st UN Conference on Climate Change (COP21) to trial V2G technology in Europe. A trial comprising 40 V2G units began in Denmark in January 2016.
TagsNissanEnelV2GLeaf