Peugeot L500 R HYbrid hugs the asphalt to deliver its full potential right from pullaway. With its […] 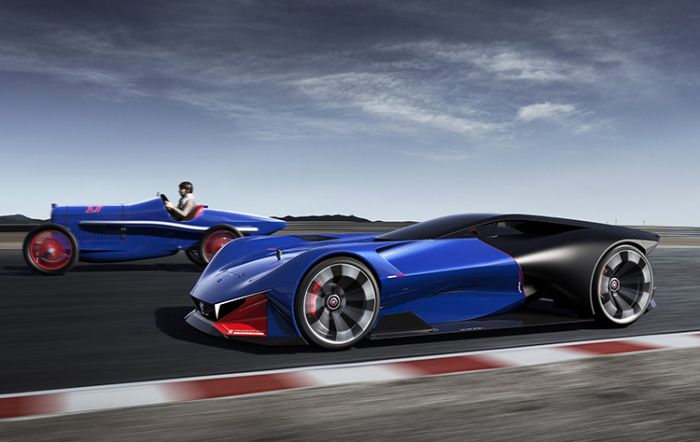 Share
Peugeot L500 R HYbrid hugs the asphalt to deliver its full potential right from pullaway. With its wide track, low profile (just one metre high) and light weight (1,000 kg), this car is made for performance: it takes just 2.5 seconds to reach 100 km/h from standstill, and 19 seconds to cover 1000 metres. Developped by Peugeot Sport teams, the 500-bhp plug-in hybrid petrol powertrain features two electric motors (one front and one rear) plus a 270 hp petrol engine, yielding peak torque of 730 Nm.

With this new concept car racing, Peugeot wants to pay tribute to a dream team, called "Les Charlatanes" , a group of pilots who gave victory to Peugeot at the Indianapolis Motor Speedway in 1913 (Jules Goux), 1916 (Dario Resta) and 1919 (Howard Wilcox).

These race cars of yesteryear were neither hybrid nor electric, equipped with noisy gasoline engines, but very modern for its time, demonstrating the spirit of Peugeot then. And today, in the field of alternative drives of lower consumption and pollution.

The Peugeot L500 R HYbrid racing car is designed to be one with its driver, driving sensations are amplified by a driver compartment deliberately designed to form an individual floating capsule enclosed in the bodywork. Through a prospective concept, the Peugeot i-Cockpit technology takes a radical motorsport stance, with a small steering wheel embedded in the structure and two holograms showing information in dual disc displays.

“With the Peugeot L500 R HYbrid we’re paying tribute to PEUGEOT racing exploits dating to the early 20th century. Inspired by this spirit of performance and innovation we wanted to convey a sculptural, elegant and technological view of the future of Peugeot motor sport”, explains Matthias Hossann, Peugeot’s concept car and technological advance chief.
TagsPeugeotIndianapolis