Zeppelins are back! After many years of neglect of this technology the British company Hybrid Air […] 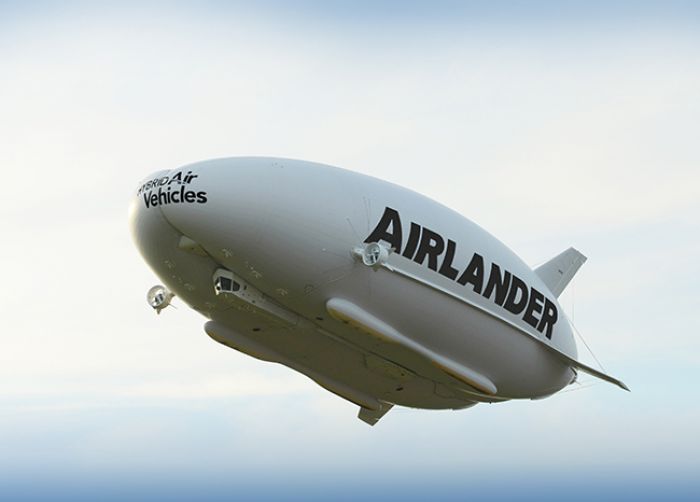 Share http://www.hybridairvehicles.com
Zeppelins are back! After many years of neglect of this technology the British company Hybrid Air Vehicles has completed the development of its Airlander 10, which has been able to make its first flight. The history of Airlander reminds us a lot of the history of the Zeppelins, a concept in vogue in the twenties and thirties, and the Cargolifter in the nineties, trying to revive the idea of ​​"air boats" or dirigibles in the heaven. The Airlander is serious, he has won two major crowdfunding (about three millons of Euros), currently has 2000 shareholders and also receives help from the European Union. Complies with the great idea of ​​all kinds of cleaner flying objects.

Its dimensions are gigantic, 92 meters long and 44 wide, the largest aircraft flying today. Its main objective is not the transport of persons but of goods, since it has a load capacity of 10 tons and a facility to land in difficult terrain, as it requires no runway and takeoff. It also has a flight range of 3,400 kilometers ... at a maximum speed of 150 km/h.

The Airlander 10, developed by Hybrid Air Vehicles, has successfully completed its first flight. All objectives of the planned flight were accomplished and the aircraft is now safely back at its masting site.

The first flight of Airlander 10 is a historic success and marks the commencement of Airlander 10’s Flight Test Programme which is expected to last for a number of months. After this the aircraft will begin a series of Trials and Demonstrations with prospective customers. Airlander 10 has been widely hailed as an innovation that will have a hugely positive impact on the world by providing low carbon aviation and brand new capabilities in the sky.

Customer interest is strong due to these game-changing capabilities of the Airlander – it offers a stable platform with huge amounts of power and space for search & rescue or communications equipment, and also offers a unique passenger experience.

The four massive but quiet engines were started approximately 30 minutes before takeoff. Once airborne, Chief Test Pilot David Burns, accompanied by Test Pilot Simon Davies, flew the majestic Airlander within a 6 mile (5 nautical mile) area around Cardington Airfield, just to the south of Bedford, in England. Airlander climbed to a height of 500ft and reached a maximum speed of 35 knots. Due to a later than anticipated take-off time the Airlander was limited to a 19 minute flight so we could land safely before darkness fell.

All test objectives were met during the flight. These included the safe launch, flight and landing of the Airlander 10 and a series of gentle turns at increasing speed. Some technical tests on its hull pressure were also undertaken.

The Airlander is expected to be a showcase of UK innovation and is already being used in the UK Government’s "GREAT Britain" campaign to highlight the strength of the aerospace sector and the innovation in engineering this country is capable of creating. As the Airlander approaches first flight, customer interest has increased, particularly in the defence and security sector, and this, together with UK Government support should secure 400 new aerospace jobs as well as valuable export opportunities for the UK economy. The next step is to ensure the UK Government runs a trial in order to demonstrate the potential of this amazing aircraft to the world and secure the lucrative exports, and grow further jobs in Bedfordshire and in the supply chain across the UK (80% of Airlander’s supply chain is British). This will help ensure the £6m of UK Government grants received thus far lead to orders. Hybrid Air Vehicles Ltd is also looking to raise equity through High Net Worth individuals and Institutional Investors to fund some aspects of the Flight Test Programme.

Founded in 2007, Hybrid Air Vehicles is the company behind the innovative Airlander range of hybrid aircraft. They utilise new aerospace technology that combines the best of the characteristics of fixed wing aircraft and helicopters with lighter-than-air technology to create a new breed of hyper-efficient aircraft, with a significantly lower carbon footprint and operating cost than other forms of air transport.

Airlanders are low noise, low pollution, and are environmentally-friendly. They have ultra-long endurance, and a point-to-point cargo-carrying capacity. They can take off and land in a short distance from unprepared sites in desert, ice, water, or open field environments. Hybrid Air Vehicles has been awarded both UK and European grant funding to support the Airlander project. In addition the company has carried out two ‘crowdfunding’ rounds and is proud to have more than 2000 shareholders without whom return to flight would not have been possible. €2.5 million in funding from the EU's research and innovation programme, Horizon 2020. The Airlander project was selected for funding through a dedicated SME Instrument of Horizon 2020, which the European Commission uses to invest in and support high growth and highly innovative small businesses. The technology is also fully in line with activities under the Smart, Green and Integrated Transport Societal Challenge of Horizon 2020, which aims to boost the competitiveness of the European transport industries and achieve a European transport system that is resource-efficient, climate-and-environmentally-friendly, safe and seamless for the benefit of all citizens, the economy and society.

Airlander 10 is designed to stay airborne for up to five days at a time to fulfil a wide range of communication and survey roles, as well as cargo carrying and tourist passenger flights.

Sono Motors, the Company that seeks to revolutionize the future of solar-powered transportation, successfully unveiled the next frontier for its…

Crow Bicycles announces the start of their first crowdfunding campaign on Indiegogo. The Crow team selected Indiegogo for their pre-launch campaign…

Urban Aeronautics Ltd., a leading Israeli aerospace, announced it has reached an agreement to provide four CityHawk VTOL aircraft to Hatzolah Air for…

The Vanderhall Navarro - The Future Of Powersports

Until now, the operation of snow groomers has been linked to the consumption of diesel, but reciently the Italian Prinoth company, presented the…