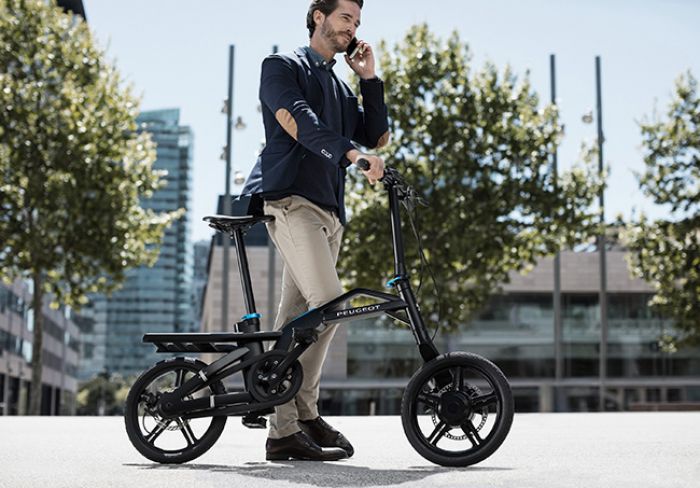 Share
Peugeot just showed a new folding electric bike that will be presented to the public at the Paris Motor Show on October 2016.

With this new bike, Peugeot likes to expand its "last kilometers" range of mobility products, so important for the new cities with outside parking space.

Thanks to an innovative folding system designed by Peugeot Design Lab, folding and unfolding in less than ten seconds is mere child's play.

The eF01 benefits from optimised ergonomics. When folded, the bikes two wheels are perfectly aligned allowing the user to effortlessly walk with the bike using the handle built into the frame. The eF01 possesses a patented memory system for the saddle which means the perfect saddle height can be quickly achieved every time.

The eF01 weighs 17 kg, can reach a speed of 20 km/h and has a lithium-ion battery for a range of up to 30 kilometres, that can be stored and recharged in the boot of any vehicle with a 12-volt outlet. The battery recharges within approximately two hours whilst driving and can also be plugged into a regular outlet. Disc brakes on the 16-inch front and rear wheels ensure optimum performance.

Connected, the eF01 uses the Bluetooth© Low Energy protocol to communicate with a smartphone. Mypeugeot APP can be used to view the current range and battery level.

PEUGEOT has been a leading brand of folding bikes, from the production of the first folding bicycle designed for the French army by Captain Henri GERARD in 1892, and with the iconic PEUGEOT folding bikes of the 1970s.