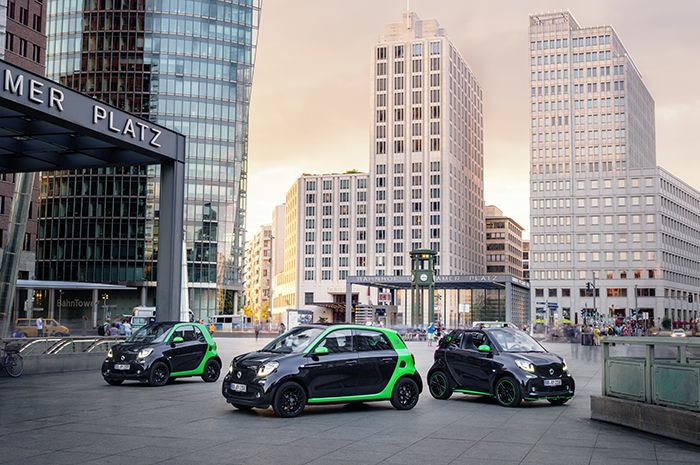 Share
The smart electric drive will celebrate its world premiere at the Paris Motor Show (1 to 16 October 2016), while the market launch will start in the USA in December 2016 and in Europe in early 2017. The entire range, smart fortwo, smart cabrio and the smart forfour, will be offered as all-electric versions.

A 60 kW (81 hp) electric motor works at the rear of the smart electric drive and transmits its power via a constant ratio to the wheels. Powerful torque of 160 Nm is immediately available from a standstill. The electric drive has a range of approximately 160 km – ideal for local emission-free mobility in urban areas. The maximum speed is electronically limited to 130 km/h to maximise the range.

Thanks to the power characteristics of the electric motor, the smart needs just one single fixed gear ratio. There is no need for any gear changing – a major advantage in dense city traffic. To reverse, the engine's direction of rotation changes. The drive is produced in Renault's plant in Clèon, Northern France.

The charging time is an important factor for electric vehicle customers and the new smart electric drive also boasts major improvements here. All models have a new, powerful on-board charger as a standard feature. In the USA and Great Britain the charging time is 2.5 hours – half as long as for the predecessor. With the "smart control" app the charging process can be conveniently monitored from afar and many more functions such as intelligent charging can be controlled.

From 2017 a particularly powerful 22 kW fast charger will be available as an option. This enables the smart electric drive to be charged much more quickly: in less than 45 minutes if local conditions allow three-phase charging.

After the world premiere in Paris, the new smart fortwo electric drive will be launched in the USA before the end of the year, where most recently around 25 percent of all smarts sold had the battery-electric drive. This will be followed by market launch of the two-seater and four-seater in Europe in early 2017.
TagsSmartDaimler