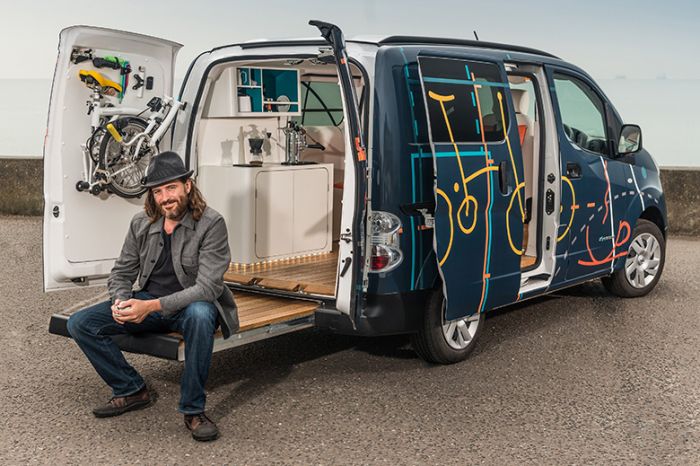 The e-NV200 WORKSPACe concept not only highlights the customisable potential of its electric van, it paints a picture of what desk-based employment could look like in the future as hot-desking and flexible working grows in popularity across the globe. Moreover, the one-off vehicle also provides an example of Nissan’s Intelligent Mobility vision, and the company’s view of how the relationship between vehicles and people are changing.

During 2015, the number of co-working and hot-desking spaces worldwide increased by 36 percent as small businesses and working professionals looked for increased mobility and a more cost-effective alternative to traditional city-centre office space. Today, the average UK commuter already spends £3582 on travelling to work each month, with London office space fetching £16193 per square metre annually, and estimated to rise a further 1.4 percent over the next year.

With electric vehicles costing as little as £0.02 per mile to run, the e-NV200 WORKSPACe offers a cost-effective desk space solution allowing users to work for free in some city-centres that offer free EV charging bays, or escape the city altogether for the countryside or coastal fresh air.

The e-NV200 WORKSPACe can be rapid charged from empty to 80 percent power in just 30 minutes, and for those times when you want to leave the office parked and charging up, there’s an internal mount for a folding Brompton Bike, allowing users to make short trips around the city or complete the ‘last mile’ of any journey.

William Hardie, celebrated UK-based designer and founder of Studio Hardie, said: “Given the van’s green credentials we wanted to maximise the space with smart and considered features such as sustainably sourced materials and efficiently-powered technology. We believe the future of technology is a return to quality craftsmanship, so we’ve also looked to hone an environment that professionals will really enjoy working in. All the comfort and connectivity of a modern office, with a few surprising touches thrown in!”