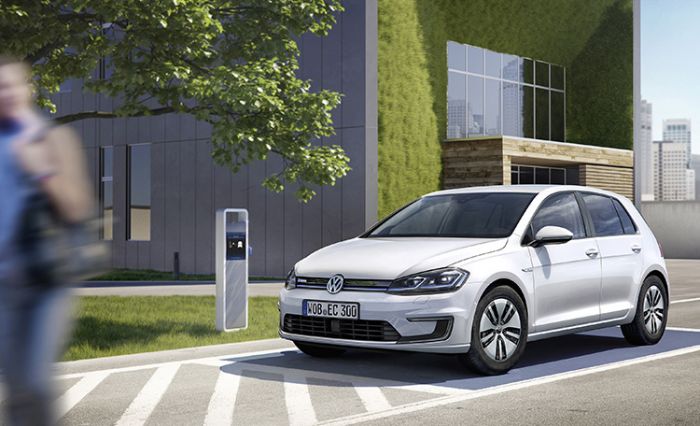 Share
Volkswagen presents the latest generation of the e-Golf in a world premiere at the Los Angeles Auto Show. Compared to its predecessor, the new zero-emission vehicle offers more power, longer range and more features (fully digital instruments and world’s first electric car with gesture control). Decisive here is its increased driving range. In terms of an annual average that is relevant to customers, the e-Golf will now cover up to 200 kilometres or more in everyday driving on one battery charge – depending on driving style and the use of air conditioning. This represents a range extension of around 50 per cent. Its driving range in the New European Driving Cycle (NEDC) is up to 300 km. In the USA, the “estimated real- world driving range” was measured as 125 miles (EPA).

In the e-Golf of the 2017 model year, Volkswagen is employing a new lithium-ion battery whose energy capacity has been increased from 24.2 kWh to 35.8 kWh. The battery can be charged to 80 per cent capacity within an hour at a CCS charging station (DC, 40 kW). When charged overnight or during the work day from a wallbox (AC,7.2 kW), the battery is ready to go again with 100 per cent capacity in less than six hours. The energy is converted into forward propulsion more impressively than ever. The electric motor now develops 100 kW, which is 15 kW more power than the first version of the e-Golf. At the same time, the maximum torque of the electric motor has been boosted from 270 Nm to 290 Nm.

In the New European Driving Cycle (NEDC), the combined fuel consumption of the e-Golf is 12.7 kWh/100 km with zero local emissions; in the USA the car’s fuel economy is 116 MPGe (EPA). Thus, the low energy consumption of the previous model has remained constant despite the increases in power and weight (due to improved battery capacity) in the new e-Golf.

Volkswagen is also extending the range of assistance systems for the e-Golf in the 2017 model year. New available systems are Traffic Jam Assist (semi-autonomous driving up to 60 km/h), pedestrian monitoring for Front Assist with City Emergency Braking and Emergency Assist (automatic stopping function in case of medical emergency of the driver).