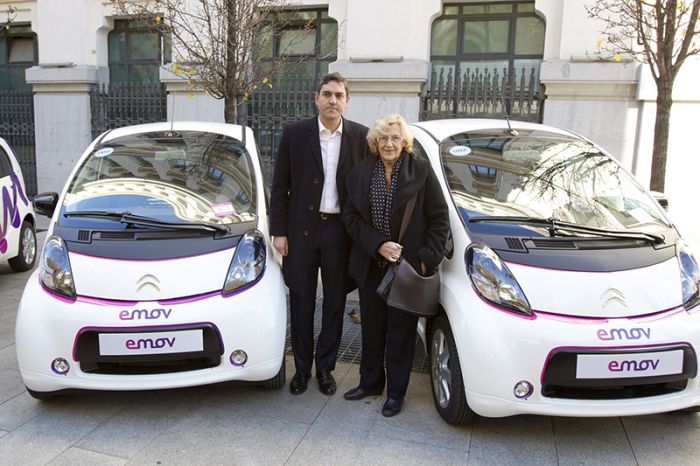 Madrid with the electric vehicle

Share
Today starts the new emov carsharing service in Madrid, offering a 100% digital rental service with a fleet of 500 Citroën C-Zero electric four-seaters. But this is not all, the multinational Uber will also start its taxi service with private drivers in Madrid with about 30 Tesla electric vehicles, the most luxurious and most autonomous car currently on the market. The mayoress Manuela Carmena can be very, very proud.

The city of Madrid takes a new step towards sustainable mobility with the start of the operations of emov. This new alternative of carsharing, with a fleet of 100% electric vehicles with 4 seats and 5 doors, has taken its first steps today in the headquarters of the City of Madrid, next to the central Plaza de Cibeles, and has been attended by the mayoress, Manuela Carmena.

In its first phase, emov has 500 Citroën C-Zero on a "free floating" regime, meaning its users can access thanks to their smartphone, any of the emov vehicles parked on the streets of Madrid. Among the advantages of the service are to leave it parked in blue or green zone without having to pay the regulated parking within the perimeter of use of this service. The only cost is the car rental, which will be 0.19 euros per minute, although a daily rate of 59 euros will be offered for long-term use.

The mayoress of Madrid, Manuela Carmena, has stated "Madrid intends to become the capital of shared electric mobility and this project culminates the many initiatives that have chosen Madrid to present it worldwide."

The collective transport platform Uber, already known worldwide despite its conflicts with Spanish legislation, also launches a fleet of electric vehicles, choosing to start its new service called UberONE in the city of Madrid, offering soon some dozen Tesla "S" models, the most desired and sophisticated electric car, to offer particular services.

The fleet of 20 BMW i3 from the company Cabify to Madrid, another company that offers special services with private driver, has already arrived; to which will be added a hundred Nissan Leaf electric taxis for the capital of Spain. Nor should you forget the more than 500 smart electric car rentals from Car2Go, which are already circulating in Madrid. That is, out of nowhere Madrid has been totally in the forefront among European capitals regarding electromovility. Congratulations, Manuela Carmena.
TagsMadridCitroënNissanBMWTeslaSmart