Speedleague is announcing its introduction of E/RACING, a new and modern motorsports series […] 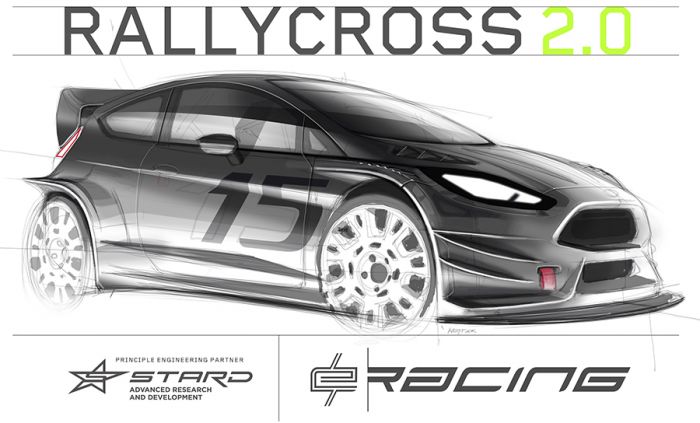 Share http://www.speedleague.org
Speedleague is announcing its introduction of E/RACING, a new and modern motorsports series featuring electric powered rallycross cars, and that it has entered into an exclusive engineering partnership arrangement with STARD (Stohl Advanced Research and Development) to properly support the series.

The new series will capitalize on the ability of electric powered race cars to outperform existing race cars in the context of rallycross: competitions in short intense elimination heat races held on multi-surfaced tracks consisting of dirt
and asphalt.

“Besides the clear environmental and technological benefits, it’s obvious that, when it comes to rallycross, electric powered race cars will provide us with a superior competition platform. They also make available more venue options,
offering a better experience for fans,” says Speedleague CEO and President Brian Gale. The inaugural season for E/RACING will make stops in five North American cities, including Los Angeles, CA and New York City, NY, and will run through the spring of 2018. The series kick-off will be October 31-November 1st, 2017 in Las Vegas, NV.

In an exclusive arrangement, the Austrian firm STARD, which is part of former WRC & WRX Star Manfred Stohl´s Group, will be the Principle Engineering Partner for the series and supply engineering support, unique components and
complete cars to the League and teams.

“For the last couple of years we have believed that EV Technology is the future in motorsport, opening up a huge number of new possibilities,” says Manfred Stohl, owner and president of Stohl Group. “The success of F.I.A. Formula-e
and the huge interest in our world´s first “HIPER MK1” electric rallycross development car indicate this proving correct. Rallycross-style racing and electric race cars seems to be a perfect match.”

The STARD engineered cars will be based on variety of production models and built to the existing F.I.A. (Federation Internationale de l'Automobile) regulations. Car features include a power output of 500 kW (670hp), an integrated all-wheel drive system with differential torque vectoring and aerodynamic kits unique to the series. Crucial to the flow of racing is a driver push-to-pass feature and a proprietary battery swap system only requiring 15-minutes. Also unique, will be certain design elements allowing for convertibility between rallycross, stage rally & short-course road racing specifications with relative ease, a capability the League and STARD are exploring further.

“Particularly after the presentation of our EV RX development car we had a lot of opportunities and requests for a variety of project possibilities,” Michael Sakowicz, STARD CEO adds. “However, the Speedleague´s concept and approach to create this unique E/RACING series convinced us to be the perfect environment for our technology. Our entire team is very excited about this great undertaking and ready to sustainably revolutionize motorsport together with Speedleague.”

Teams interested in competing in the series will be offered the ability to lease or purchase complete ready-to-run cars built by STARD in time for the first event. The option for teams to build cars to League specifications using STARD
supplied components will be considered on a limited case-by-case basis.

Known as a Charter, certain rights will be granted exclusively to participating teams by the League for each car. Limited to twelve in the first season, an additional six Charters will be added in the second season and then capped at
eighteen. Charters will earn long-term benefits for the teams, including sharing in certain revenues.  The E/RACING series is owned, operated and sanctioned by Speedleague, an international motorsports organization founded in

Led by CEO Michael Sakowicz, since 7 years EV components, systems and entire cars especially also for motorsport are a core part of STARD´s research and development activity such as the recently presented “HIPER MK1” electric
rallycross development prototype. STARD is based in Gross Enzersdorf, Austria.
TagsSpeedleagueStard