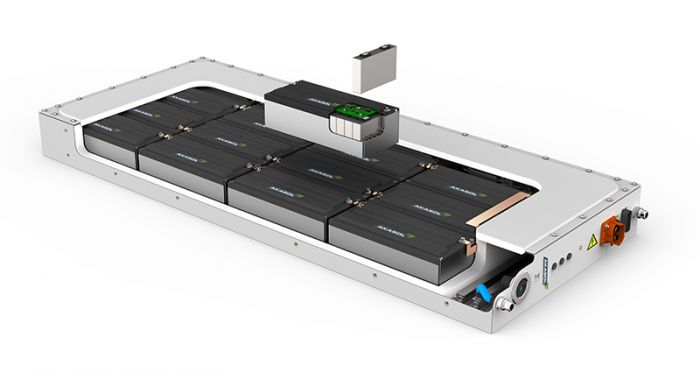 Share http://www.akasol.com
A not named Northeuropean manufacturer (we guess this is Scania) has entrusted the German Akasol company with the serial production of lithium-ion battery systems for its entire fleet of e-buses. The contract, which represents hundreds of millions of euros and lasts until 2023, outlines a close, long-term partnership between both companies and involves the supply of up to 4,500 battery systems.

The first serially produced e-buses equipped with AKASOL battery systems are due to be released starting in 2018. The sustainable public city e-buses can be fitted with either hybrid or battery electric drives, and boast a capacity of 150 to 300 kWh. AKASystem OEM’s modular nature allowed to provide the required level of energy performance and endurance while complying with specifications. AKASystem OEM maintains the optimum temperature conditions for operating batteries due to an innovative and cost-efective fluid cooling system. Developed to comply with ISO 26262, these lithium-ion battery systems can be fast-charged with up to 500 kW and achieve more than 3,000 full cycles.

The new battery storage system is easily interchangeable and can be connected in any customer-specific variation, meaning it is completely scalable. The standard version has a battery storage capacity of 24.4 kWh at a voltage of 661 V (nominal), and can reach outputs of 150 kW (peak). Depending on system specifications, any number of the new solution’s battery boxes can, in theory, be connected in parallel or in series.