Harrods, the legendary London department store addd again an electric van to its fleet, as already […] 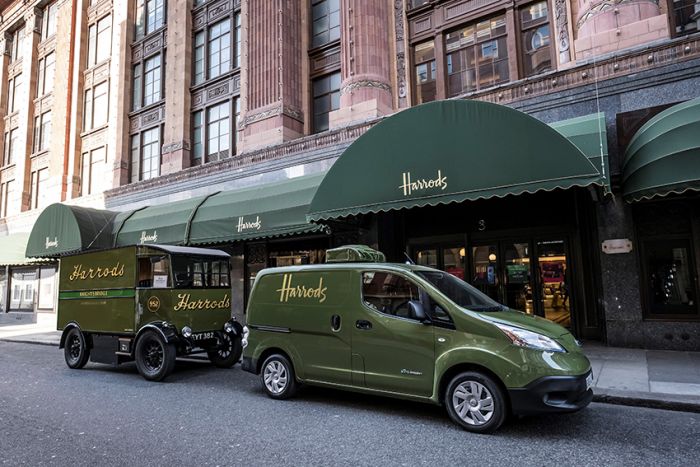 Share
Harrods, the legendary London department store addd again an electric van to its fleet, as already done in the Twenties. In former times they used first American Walker electric vans to create late their one fleet of electric vans, and today they use the new Nissan e-NV200 delivery van, built in Spain.

The Nissan e-NV200 has been specially adapted to perfectly fit Harrods’ delivery needs. The load space of the van has been fully refrigerated and shelving units added to allow for fresh groceries to be transported in optimum condition. The exterior has also been wrapped in the traditional green and gold Harrods livery to make it recognisable as it travels around the city.

The e-NV200 has a range of up to 106 miles on a single charge*, which means it is easily capable of making up to 50 deliveries per week covering an average distance of 150 miles in the London area with Harrods only needing to charge it once a week.

With an average running cost of as little as 2 pence per mile, the e-NV200 offers an alternative practical solution which will have a positive effect on city-centre air quality.

In 1919, the store used solid-tyred American Walker electric vans, later building its own fleet of 60 electric vehicles to deliver goods to local London customers. In spite of their limited performance, these vans were a great success for the stores, since they created at that time the seal of being careful with the environment. Later the English prepared a fleet of their own models for this distribution, without becoming manufacturers. Even today, several of its delivery vans are still preserved, all of them with logos on the sides of the warehouses, the best possible publicity.

The Walkers were built in Chicago between 1907 and 1942. At first they had a 3.5-hp electric motor and a generous battery pack to produce 60-80 volts and about 40-amp. With a speed of about 10-12 mph they could reach a 50 miles range, more than enough for its mission as city dealer. Walker exported his models to several countries, mainly England and New Zealand.
TagsNissanHarrods