The Chinese NIO EP9 set a new lap record at the Nürburgring Nordschleife on May 12th, achieving a […] 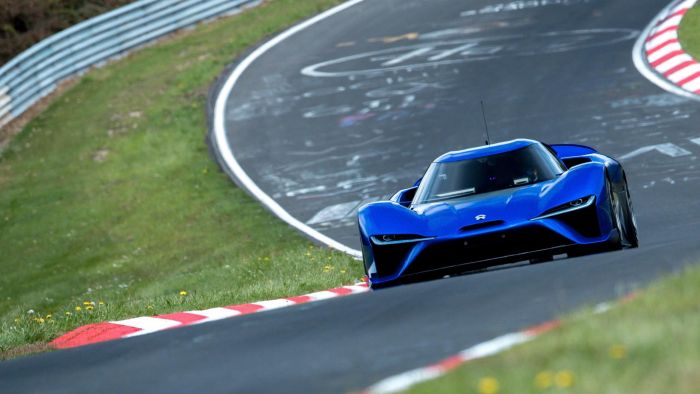 NIO EP9, the quickest electric car on the Nürburgring

Share
The Chinese NIO EP9 set a new lap record at the Nürburgring Nordschleife on May 12th, achieving a lap time of 6m 45.900s (six minutes, 45.900 seconds). Quicker than the Radical SR8LM and the Lamborghini Huracan.

Note from the editor: by the way, I am just finishing my first book about "Histories of Electric Cars" The Pioneers 1870-1906, that will be available in some days, learning that history is coming back. In 1898 and 1899 the Belgian Jenatzy and the French Chasseloup-Laubat started to beat each other in road race duels, always at the same place and with same conditions. Both wanted to be the fastest man in the world driving a car. One time, the count won who drove Jeantaud electric cars, the other time, won the Belgian with his own vehicles reaching every time higher speeds. They exceeded the limit of 70 km/h, 80 km/h when they realized that the electric motors reached their limit. They saw themselves obliged to look for other solutions in order to make their cars faster. Jeantaud opted for smoother sheet steel, covered the bottom of his car and developed a bodywork with an even frontal part and thus coming closer to aerodynamical concepts which later started to be fashioned. With a car prepared like this, the count reached the 93,724 km/h in March 1899. The duel seemed to be won. But Jenatzy sent from Belgium the notice that he will not give in.


And here we have the press information from NIO, one of the powerfullest electric car of the world with 1.360 CV:

“In October 2016, we aimed to set a new lap record for an electric vehicle with our NIO EP9. In the inclemental weather that the Nürburgring Nordschleife is known for, the EP9 completed two laps of the 20.8 km (12.9m) ‘Green Hell’, one of which was in 7m 05.12s, beating the previous EV lap record, making it the fastest electric car in the world. The EP9’s new lap record is 19.22 seconds faster than its previous lap time. This is a fabulous achievement for NIO and I am very proud of the team that has worked tirelessly to achieve this accolade,” said Gerry Hughes, Head of Performance Program & FE Team Principal, NIO.

Last month, NIO announced that it plans to produce a second batch of ten EP9s, and each one will be made to order. The NIO EP9 is priced at 1.48 million USD.

“As a company, we were born to push limits. Setting and breaking records with our EP9 is for the sole purpose to show the world that we have the automotive and technical expertise to succeed in the global automotive market. Our vision is to be the best of the next generation of car companies by producing the smartest vehicles in world,” said Padmasree Warrior, CEO, NIO, U.S.

NIO is a global start-up, designing and developing smart, high-performance, premium electric vehicles. NIO has thousands of world-class R&D and design experts from around the world with significant technology and management background from leading automobile and high tech companies. NIO has more than 2,000 employees in San Jose, Shanghai, Munich, London and eight other locations.  In October, NIO USA announced that it was issued an Autonomous Vehicle Testing Permit by the California DMV and it would begin testing on public roads under the Autonomous Vehicle Tester Program guidelines as it progresses on its path to bring autonomy to market. Investors include Tencent, Temasek, Baidu Capital, Sequoia Capital, Lenovo, TPG and other world-renowned investment institutions.