South Korean manufacturer Hyundai is already an expert in electromobility. Following the […] 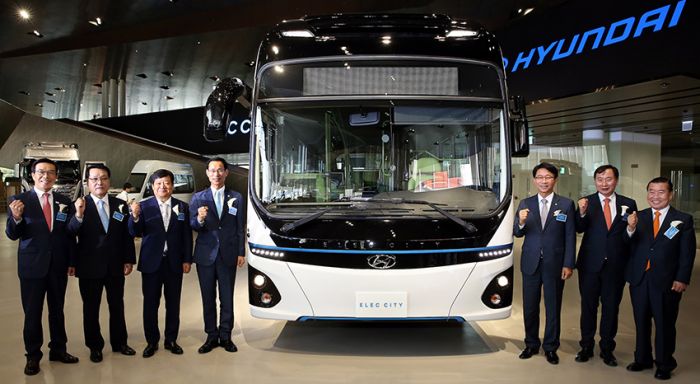 Share
South Korean manufacturer Hyundai is already an expert in electromobility. Following the introduction of the IONIQ car, which is causing so much interest, especially its totally electric version, come non-polluting industrial vehicles. Hyundai has presented its new version of the Elec City bus with more than 300 kilometers of autonomy.

“We’re sure that a new era of commercial vehicle enterprise will begin with this showcase event.”

Mr Yeongduck Tak, Senior Vice President, Head of Commercial Vehicle R&D Division said, “Hyundai Motor has achieved a lot in the eco-friendly vehicle field, but we will never stand still. We continue to invest heavily to ensure zero-emission technology for all commercial vehicles.”

Elec City provides a glimpse into the future of the public transportation. The bus demonstrates the suitability of Hyundai Motor’s pioneering fully-electric powertrain for commercial application.

On the road, Elec City boasts best-in-class driving range. With a 256kwh lithium-ion polymer battery, the bus can drive 290km (180 miles) on a single charge. Furthermore, it features a variety of safety- and human-centered facilities, such as Around View Monitoring and a Full Color Digital Cluster.
TagsHyundai