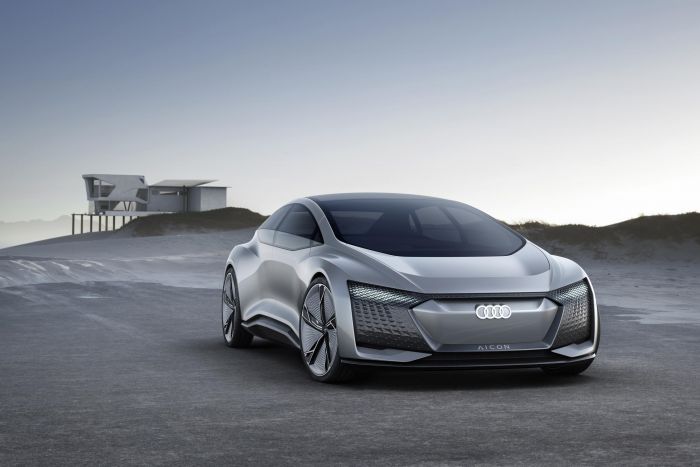 NO PEDALS, NO STEERING WHEEL– THE AUDI AICON CONCEPT CAR

Share
The Audi Aicon exploits every possibility offered by an autonomous luxury saloon of the future with unprecedented consistency. As a design study, the four-door 2+2 boldly leaps ahead to show the exterior and interior design of the next decades. The technology demonstrator combines innovations relating to the drivetrain, suspension, digitalization and sustainability in a visionary manner. And as a mobility concept, the Audi Aicon shows the world of tomorrow, in which the advantages of door-to-door individual transportation are combined with the luxurious ambiance of a first-class airline cabin. A cabin with no steering wheel or pedals that can thus offer all the comforts of modern communications electronics and perfect ergonomics – simply first-class.

The very shape of the Audi Aicon reveals that it is a car from another world, an automobile of the future. The technology used in the concept vehicle has also been systematically designed for this world. It presumes a transportation infrastructure in which autonomously driving automobiles are a given on every street. Road users are connected to one another and their surroundings.

This also means that traffic will be less hectic and flow more smoothly in the future than is imaginable today. Even at moderate speed limits, long distances can be covered at a high constant speed of around 80mph. Passengers experience the journey as comfortable cruising without constant braking and accelerating.

Accidents will also be a thing of the past thanks to the highly advanced sensor systems and networking. Passengers in a car like the Audi Aicon will therefore no longer need classic restraint systems. They will also experience a physical sense of freedom during their journey that in 2017 still appears visionary.

The drive and the total vehicle have also been optimally adapted to this new world of mobility. A highly efficient electric drive provides for the dynamics of the Audi Aicon. A total of four electric motors are located in the area of the front and rear axles. The energy storage units are integrated into the area below the floor. These are solid body batteries with considerably more energy capacity than lithium-ion batteries.

The four electric motors produce a total of 260 kW and 550 Newton meters (405.7 lb-ft). Each drives one wheel, enabling electronically controlled, variable quattro all-wheel drive. Maximum acceleration played a less important role in the specification than maximum efficiency and thus also range. This operating strategy is also pursued by the powertrain and electric brake units, which use recuperation to recover energy. Targeted lightweight construction of the multimaterial body and optimised aerodynamics also help the Audi Aicon to achieve ranges of between 434 miles and 497 miles on a single charge.

Even charging has been reduced to a minimum. Thanks to a high-voltage system with 800 volts, the Aicon’s battery unit can be charged to 80 percent of capacity in less than 30 minutes. The car is also equipped with a unit of inductive, i.e. wireless, charging. The Aicon manages both without a driver. In an AI Zone, it can pull up to a charging station on its own and charge its battery without any human assistance.

As a true quattro, the Audi Aicon offers ample performance and even autonomously always reaches its destination safely regardless of the weather or road surface. The suspension is designed for maximum comfort. Pneumatic spring and damper units smoothe out any road surface irregularities. And electric actuators at all four wheels actively counteract any body lean, whether when cornering, accelerating or braking. As a fully active suspension system, it also optimises the qualities of the adaptive air suspension. The Audi Aicon literally glides over even large potholes.

The Aicon brakes primarily by way of recuperation and in so doing recharges the batteries. The development engineers have relocated the disc brakes from the wheels to a position close to the drivetrain. This improves the aerodynamics at the wheels as there is no longer any need for air cooling at the wheels, which is always associated with turbulence. Another secondary effect is the reduction of the unsprung masses, which the Aicon’s passengers perceive as a particularly sensitive damping response to road surface irregularities.

The axle and drive units in the Audi Aicon are symmetrical, i.e. identical at the front and rear. Mechanical components, such as the steering shaft or steering hydraulics, have been eliminated. The car is therefore equipped with a complete all-wheel steering system without compromising the available space and thus the passenger compartment. A positive effect for the practical qualities of the Audi Aicon: Despite its long wheelbase of nearly 3.47 metres, the car is extremely agile due to its two steerable axles – the turning radius of only 8.50 metres is below that of a small car thus making the Audi Aicon suitable for city centre driving.

The Audi Aicon is an all-arounder well prepared for its primary task: to offer a maximum of comfort, communications technology and freedom for its occupants during a long journey. It combines the scopes for autonomous driving in an urban environment and on the highway with an unprecedented range for an electric drive. The Aicon will be followed by further multitalented Audi models, each with their own specialised discipline, ensuring that the vehicle range of the brand with the four rings remains as diverse as it is fascinating.
TagsAudi