7 minutes and 57.148 seconds – Volkswagen set a new best time in the most impressive manner at the […] 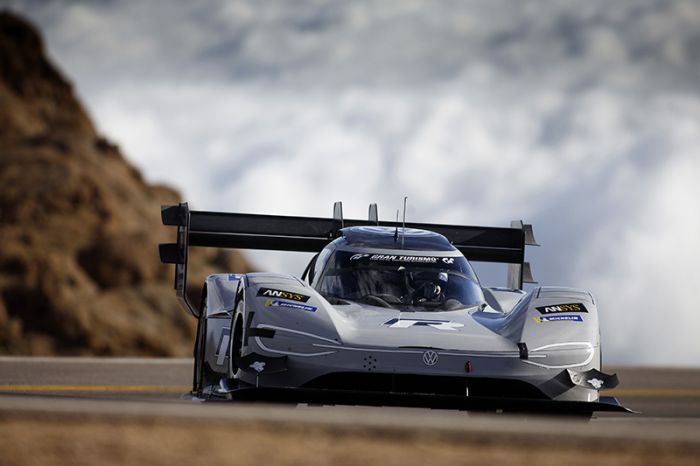 Share http://www.historiasdelcoche.com
7 minutes and 57.148 seconds – Volkswagen set a new best time in the most impressive manner at the Pikes Peak International Hill Climb (USA), making a bold statement for electromobility. At the wheel of the fully-electric I.D. R Pikes Peak, Romain Dumas conquered the competition powered by conventional drive technology and improved on the 2013 record set by Sébastien Loeb (F) by 16.730 seconds.

Romain Dumas, how did you feel that the race went?
“That was an unbelievable race. I have been trying to get under eight minutes for years. Now it has finally worked out. I found my rhythm fast and my first sector was nearly perfect. I had some fog in the second section and that made the turns very slippery. I didn’t want to take too many risks and lost a few seconds there. Thankfully, the sun came back out in the third sector and I was able to go on the attack again. After the last hairpin bend, I spoke to the car and said ‘come on, only 500 metres to go’.”

You had already won at Pikes Peak three times and celebrated countless successes in endurance racing, including Le Mans. Where does this win fit in?
“It’s right up there. Anyone who knows me, knows what Pikes Peak means to me. When I was six years old, I said that I wanted to drive here one day. Now I have won it four times. That is always something special but this year it was even more so, as Volkswagen has developed a completely new racing car and it was also my first time in a fully-electric car.”

What do you think of working for and with Volkswagen?
“I am very impressed. Developing a car like the I.D. R Pikes Peak in just eight months is a real feat of engineering. Congratulations! Many thanks are also due to the mechanics for their hard work, especially in the last three weeks, and for making this success happen.

As I relate in my book "The Pioneers", the first of the books of "Stories of the Electric Car", while in the United States there were car races since 1895 mainly on roads or circuits, which won electric cars many times , in Germany mountain races predominated, where we find the precursors of the Volkswagen in the Lohner-Porsche. On September 23 Ferdinand Porsche rode in a Lohner-Porsche electric car to make a record speed uphill. Climbed Mount Semmering in Austria to ascend the 400 meters difference in height in 10 kilometers of travel; exceeded the record made two weeks earlier by a gasoline car.

In the other photo we see the Lohner-Porsche Mixte used in the Exelsberg race of 1902, a mountain race, aboard one of the first hybrid models, which combined a Daimler gasoline engine with an electric Lohner engine. A dynamo transformed mechanical energy into electricity, since the electric motor propelled the vehicle (Photos: Porsche). That is to say: the Volkswagen brand was always developed in mountain races.