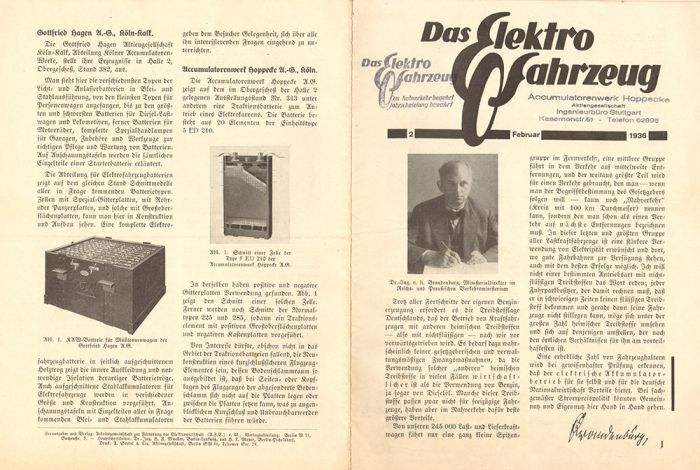 Share http://www.historiasdelcoche.com
The latest news for my collection - and to introduce it in the future books on HISTORY (S) OF THE ELECTRIC CAR - is the acquisition of 19 copies of the German magazine "Das Elektrofahrzeug" (The Electric Car) from the years 1936 to 1940 - a black and white magazine which speaks mainly of the need to reduce dependence on oil, since a dependency is never good for any country. The use of electricity in city vehicles, according to the magazine, is enormously beneficial, not only for state coffers, which save in foreign currency, but above all for the owner of this type of vehicle, which saves many expenses mainly in maintenance and consumption.

This magazines, presented as "Specialized Journals for the Promotion of the Use of Domestic Products for Transportation in the City", offer presentations and tests, driving experiences of electric delivery vehicles, experiences of companies, as well as the full range of vehicles available. They also repeat that it is always cheaper to use a national product for the operation of vehicles. And as Germany does not have oil deposits, any other national "fuel" comes out cheaper than importing the precious liquid. The magazines tell us that the use of electricity is the best for delivery vehicles in the city, vehicles that have not to pass the 100 kilometers of route, and, even more so, for delivery vehicles with many stops, since at the stops the electric car does not consume (and does not pollute). They also talk that in those years Germany offered the standardized batteries, that is, a single battery model, presented by the AFA, the large battery consortium of the time, and that it was planned to create a large network of battery change locations. - to replace exhausted by full batteries - in many places.

In the offer there were also many types of electric carts and trolleys of all sizes, which were part of urban distribution traffic. Some models of vans carried a very lower cab forward cabin with a platform also low to facilitate loading and unloading. In addition some companies also offered cars, such as the Bleichert, either with body of two or four seats, in the form of sedan or convertible or coupe. According to the data, it had an autonomy of about 100 kilometers in 1936 - and, as the magazine indicated -, if the idea of ​​installing many "battery change" stations went ahead, it could be done many more kilometers. Ideal for doctors, official jobs, inspectors of all kinds, etc. And, also ideal for anyone with limited mobility, or people who lack an arm or a leg could lead, since the use was very simple. These same cars were offered with restricted speed of 20 km/h for the use without driver's license.
TagsV. Christian Manz