BMW, Official Automotive Partner to the London 2012 Olympic and Paralympic Games, is keeping the […] 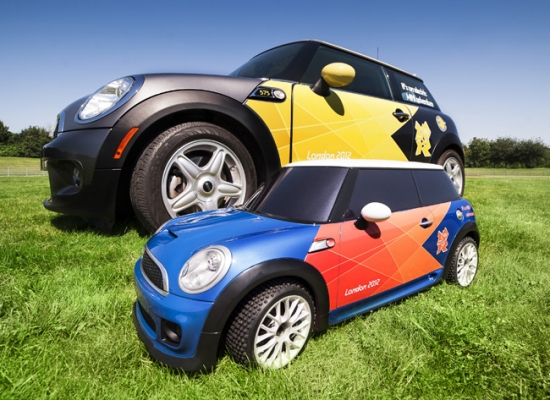 The E-MINI minis of radiocontrol

Share
BMW, Official Automotive Partner to the London 2012 Olympic and Paralympic Games, is keeping the Games moving with a range of fully electric vehicles as part of the fleet. The 160 BMW 1 Series ActiveE models and 40 MINI E’s are being used for many duties including shuttling athletes and officials within the Olympic Park and surrounding Games sites. They also helped support elements of the Olympic Torch Relay convoy on its journey around the UK and will do so similarly for the Paralympic Torch Relay.

Today, BMW is proud to introduce another critical electric vehicle to the Olympic and Paralympic fleet: the Mini MINI. This specially developed and designed radio controlled electric car will be used on the field of play in the Olympic Stadium to ferry javelins, discuses, hammers and shots back from the field to the throwing area, saving valuable time during competition.

Three Mini MINIs will be deployed for this crucial task and will be operated by Games Makers assigned and trained for this duty. The cars are roughly a quarter scale of the full-sized car and carry the athletic equipment situated inside, accessible through the adapted sunroof.

“The MINI team was thrilled to be given this challenge to develop a vehicle with such an important and high profile role during the Olympic and Paralympic Games,” commented Dr Juergen Hedrich, Managing Director of MINI Plant Oxford. “I know that everybody was inspired by the challenge and the knowledge that these models will be seen in action by millions of people around the world.”

The cars were designed and built to a specification agreed with LOCOG to ensure their role on the field of play is successful in saving time during competition. Each of the three Mini MINIs will cover around 6,000 metres per day in four-hour shifts across nine days of Olympic and nine days of Paralympic competition. The Mini MINIs will:
1.    Carry a load of up to 8kg; a single hammer, discus or shot or two javelins.
2.    Be operated with a simple control system requiring minimum technical support.
3.    Be powered by batteries that can sustain 35 minutes of continuous usage with a radio control range of approximately 100 metres and be fully re-charged in 80 minutes.

After the closing ceremony of the Paralympic Games, the three Mini MINIs will return to base for well-earned rest and relaxation before their next athletic adventure.