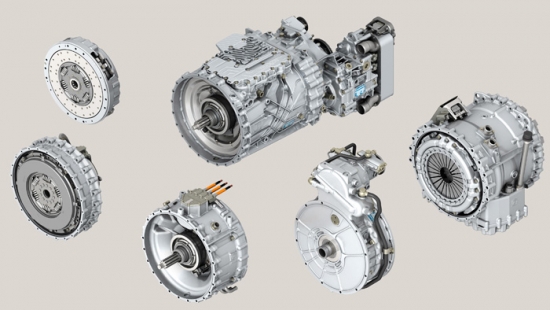 Share http://www.zf.com
ZF presents its new automatic transmission system for heavy trucks on the 2012 IAA Commercial Vehicles. With a completely new basic transmission and a modular concept, TraXon meets the demand of the commercial vehicle market for a versatile solution for a broad range of applications.

The innovative transmission combines several contradictions at the same time: It offers more torque, without compromises with regard to the power-to-weight ratio; it has a higher gear spread while the noise quality was improved; and, depending on the application, it can not only be driven by a dry clutch but also by a hybrid module, dual-clutch module, or a torque converter clutch. Furthermore, it can be combined with an engine-dependent PTO. For the new transmission, ZF developed the revolutionary PreVision GPS shifting strategy which works in an anticipatory and especially fuel-saving way thanks to GPS connection and an interface to navigation data.

With the TraXon and a vast number of innovations at the transmission hardware and the control software, ZF sets new standards and enables an enormous functional diversity in the commercial vehicle transmission. "With the TraXon we aim at sustainability", says Rolf Lutz, Member of the Board of Management responsible for the Commercial Vehicle Technology division. The development for the current market launch focused on a further increase of economy and customer benefit as well as the suitability for a range of applications which is as broad as possible."

At the core of the innovation, you will find a basic transmission featuring very compact dimensions with a splitter group, main group, and range change group, as well as two countershafts and one main shaft. It is this space-saving design in combination with the newly designed gearsets that turns the TraXon into a benchmark in terms of the power-to-weight ratio: The new ZF transmission can transmit torques considerably above 3,000 newton meters and is therefore also attractive for markets where trucks with a gross vehicle weight of 60 tons are used. TraXon can be obtained with 12 or 16 speeds - both are available as Direct Drive or Overdrive versions – the latter with a particularly long ratio of the highest speed. All versions of the TraXon basic transmission have a very high transmission spacing, enabling the driver to maneuver the truck in a balanced and comfortable way without the transmission becoming more prone to wear, e.g. due to excessive load on the clutch.

ZF development engineers managed to considerably reduce the noise development of the TraXon compared to the AS Tronic by an average of 6 dB by introducing a new gearing design, innovations for the transmission housing, and by integrating an anti-rattling damper.

Furthermore, the transmission concept allows for two additional reverse gears. ZF offers the TraXon with a total of four reverse gears as additional option. These enable longer, quicker reversing for special applications, such as trucks which are used at highway construction sites.
In terms of efficiency, the TraXon basic transmission with a transmission efficiency of about 99.7 percent (Direct Drive) is extremely well positioned compared to the competitors.

One essential advantage of TraXon is its modular transmission design. This makes it possible to combine the basic transmission with three starting or shift modules, respectively, which make the transmission more economical in practice, give manufacturers and fleet operators the best possible flexibility for every application, and increase the comfort for the driver. In addition to the single and twin plate dry clutch for applications with particularly high torque requirements, ZF will offer the "TraXon Hybrid", a hybrid module for the TraXon - for the first time for heavy commercial vehicles. An electric motor with 120 kW power and a separating clutch enable all hybrid functions – such as recuperation, electric driving, boosting, and the start-stop function. For special transports, the electric motor can also be used for the power supply of additional units – e.g. for cooling. Also electric consumers in the driver's cab can keep running with the TraXon Hybrid even when the combustion engine is shut down. "Studies have shown that the use of hybrid drives in heavy trucks bears considerable savings potential", says Bernd Stockmann, responsible for Truck and Van Driveline Technology at ZF's Commercial Vehicle Technology Division. "It is true that the approx. five percent fuel savings are below the savings that can be achieved in delivery traffic. With the considerably higher mileage and fuel consumption of heavy trucks, hybrid technology is nevertheless an economical solution that goes easy on resources and pays off within a reasonable time period."

By combining the TraXon basic transmission and a dual clutch module under the name "TraXon Dual", ZF prepares the ground for a future trend with truck manufacturers: In order to save fuel, very long rear axle ratios can be installed that distinctively reduce the engine speed in the highest gear. However, this would increase the shift frequency with ordinary automatic transmission systems because the next lowest gear already has to be selected on slight uphill gradients. With the dual clutch module, it is possible to perform these downshifts and upshifts under load and without torque interrupt – as opposed to the shifting process in conventional automatic commercial vehicle transmissions. These comfortable and nearly unnoticeable gearshifts also optimize fuel consumption.

It is also possible to combine the TraXon basic transmission with a torque converter clutch for the use in heavy road tractors. "TraXon Torque" can also start wear-free with high input torques and stands for smooth and comfortable maneuvering at low life cycle costs.

One option is the engine-dependent PTO. It is installed between the transmission and vehicle engine following the sandwich principle and it is especially attractive for commercial vehicles where the auxiliaries require very high torques regardless of the vehicle speed – for example for special fire trucks, mobile cranes, and concrete pumps.

ZF engineers have developed a standard software platform for the transmission control unit that can be used in all TraXon variants. It draws back on a number of sensors to determine the pitch, direction of rotation, or speeds, thereby enabling innovative transmission functions such as the anticipatory shifting strategy, rolling function, and more comfort when maneuvering or starting.

The anticipatory GPS-based driving strategy PreVision GPS will prove to be an absolutely trailblazing innovation. ZF gives truck manufacturers the opportunity to link up the transmission with GPS data and digital map material. With the corresponding integration in the vehicle, PreVision GPS prevents gearshifts that may be unnecessary within the context of the terrain – for example when a conventional transmission control unit shifts up a gear before an uphill gradient or a narrow bend, just to shift down to a lower gear shortly after.

On slightly sloping freeway or rural roads, the new TraXon's rolling function makes sense: The transmission goes out of gear, the driveline is decoupled during the rolling phase, and the engine is running idle – possible drag losses are avoided, leading to corresponding consumption and emission savings. On the other hand, the topography-based control immediately detects steep slopes and applies the engine and transmission brake instead of the rolling function in order to preserve the service brakes.

The Visitor: Trucks For Cape Juby In Morocco

The American Max Kite, looking for the history of the railway station Serón at Almeria (South of Spain), sends us this photograph of a unique car…