and wins major order for electric vehicles from Renault-Nissan […] 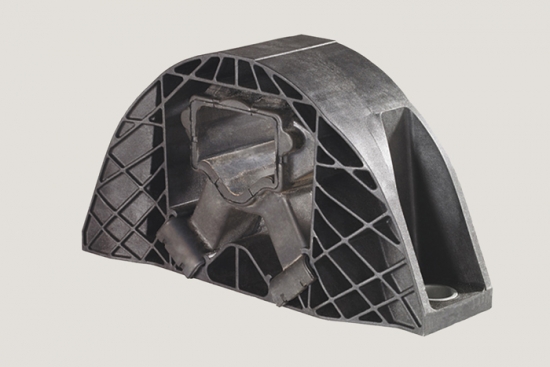 Lightweight design is one of the key technologies when it comes to reducing the energy consumption of vehicles. However, automotive manufacturers and suppliers are not able to draw on a superordinate patent solution. In actual fact, the sum of the individual weight reductions in numerous passenger car components represents the key to success. Thus, ZF Friedrichshafen AG developed a pioneering rubber-plastic engine mount that immediately convinced Renault-Nissan: It dampens vibrations just as effectively as previous rubber-metal constructions yet weighs approximately 25 percent less.

Shortly after the production start, it is already being produced in 6 model-specific versions for small and compact cars, as well as electric cars of Renault-Nissan – they are made-to-measure in the housing, rubber interior part, and support arm engine mount components respectively. "Our objective was to increase the maximum lightweight construction potential of standard engine mounts and to further optimize both functionality and reliability," explains Dr. Torsten Bremer, Head of the Rubber & Plastics business unit of the Chassis Technology division.

The ZF engineers mastered this challenge by implementing the engine mount housing using fiber-glass reinforced polyamide instead of aluminum continuous casting as was previously the case. A total weight reduction of 25 % is achieved thanks to the use of the plastic housing. However, it is crucial that the component remains just as efficient and stable as its predecessor. Furthermore, the part is also completely insensitive to corrosion and 100 % recyclable.