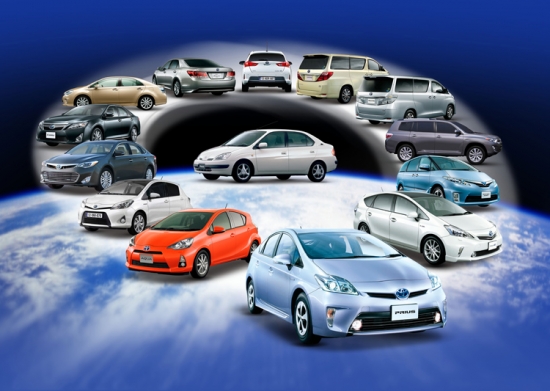 - More than five million Toyota and Lexus hybrid vehicles sold globally since 1997
- Hybrid remains a core technology for Toyota’s development of more environmentally efficient transport
- 18 new hybrid models to be launched around the world by the end of 2015, including Toyota’s first production hydrogen fuel cell vehicle
- Current range of nine UK full hybrids to increase this summer with the introduction of the new Lexus IS 300h, GS 300h

Prius has gone on to become one of the world’s best-selling cars and it features today among 20 different hybrids – including the first Toyota plug-in hybrid – sold by Toyota Motor Corporation in around 80 countries and regions.

That figure is set to grow as the company plans to introduce 18 new hybrids and a fuel cell vehicle within the next two years.

Toyota calculates that its hybrid vehicles2 have contributed to around 34 million tonnes3 less CO2 entering the atmosphere, compared to the impact of the same number of petrol-powered vehicles of similar size and performance. In terms of fuel, it estimates on the same basis that 1.2 billion litres of petrol have been saved.

Takeshi Uchiyamada, Toyota Motor Corporation Vice-Chairman, who was responsible for development of the first-generation Prius, said: “We developed the first-generation Prius with the aim of making it a car for the 21st century and as an indication of Toyota’s response to environmental issues. We had to develop a hybrid system from scratch, making our task extremely difficult. Nevertheless, we took on the challenge. The launch of the first-generation Prius had effects beyond our expectations, with the vehicle increasing consumer environmental awareness and raising hybrid vehicle expectations. The understanding of consumers at launch time laid the foundation for the widespread adoption, and, since then, consumers have continued to support TMC hybrid vehicles. For this, I am extremely grateful.”

The current range of nine Toyota and Lexus hybrids in the UK will increase too, first with the arrival this summer of the new Lexus IS 300h executive sports saloon and the British-built Auris Touring Sports Hybrid, Europe’s first full hybrid family estate car. This will give it unprecedented market reach, from the Yaris Hybrid supermini all the way to the Lexus LS 600h limousine.

UK Sales of Toyota and Lexus hybrids are nearing the 100,000 mark since the original Prius made its debut here in 2000. This contributes to a European figure of 544,184 cars sold up to the end of March – more than 10 per cent of the global figure.

The way in which customers have come to understand and embrace hybrid is reflected in the speed of sales growth: in Europe it took seven years for the first 100,000 to be sold, while in 2012 alone the figure was more than 109,000. In the first quarter of 2013 European sales have increased 82 per cent year-on-year, accounting for 21 per cent of the Toyota’s sales total.

Customers in the UK and Europe who choose hybrid enjoy lower cost of ownership and attractive tax benefits. As well as reducing CO2 emissions, the hybrid system plays an important part in improving air quality by emitting less NOx and particulate matter than diesel vehicles.