Marc Gene driven one of  the R18e-Tron quattro […] 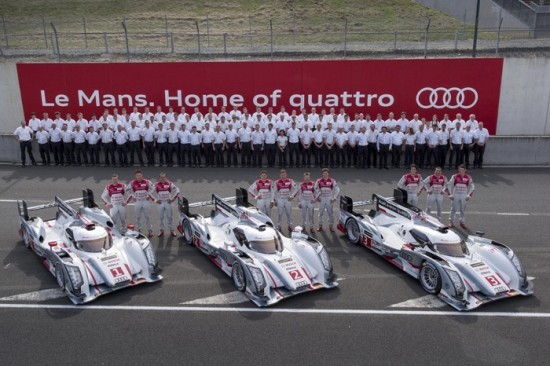 Share http://directorio.prestigeelectriccar.com/empresa-57-Audi
Marc Gene driven one of  the R18e-Tron quattro

On June 22/23, Audi will be competing at the classic 24-hour race at Le Mans for the 15th time. On the 90th anniversary of the world’s most important endurance race, the challenge is particularly great for the brand with the four rings, following the most recent changes in the regulations.

Le Mans 2013 will be a year of historic dimensions. The inaugural event of the endurance race was held 90 years ago. Audi is now competing for the 15th time. The current World Endurance Champions Marcel Fässler/André Lotterer/Benoît Tréluyer (CH/D/F) will enter the race in the number ‘1’ Audi R18 e-tron quattro. If successful, the three drivers, following two consecutive victories, could manage a hat-trick at La Sarthe. This was last achieved by another Audi trio: In 2000, 2001 and 2002, Frank Biela/Emanuele Pirro/Tom Kristensen (D/I/DK) remained unbeaten three times in succession.

Le Mans record winner Tom Kristensen (eight wins) expects to be in contention for a top result with his current team-mates Loïc Duval (F) and Allan McNish (GB) as well. In April, the trio won the season opener of the FIA World Endurance Championship (WEC) at Silverstone. A year ago, Kristensen and McNish finished as the runners-up at Le Mans.

The driver line-up of the Audi R18 e-tron quattro designated as car number ‘3’ is aiming for the trophy as well: Marc Gené (E) was the overall winner at Le Mans in 2009. Oliver Jarvis (GB) was on podium at Le Mans for the first time last year and in March won the 12-hour race at Sebring (USA) in the R18 e-tron quattro. Lucas di Grassi (BR) is experiencing a premiere. The Brazilian is contesting his first Le Mans race and since making his WEC debut with Audi last September has finished his three races to date on the podium. In doing so, he continually benefited from the wealth of experience of his team-mates in the Audi driver squad that boasts an amazing combined tally of 17 Le Mans victories.

On the technology side, the team of Head of Audi Motorsport Dr. Wolfgang Ullrich and Chris Reinke, Head of LMP, has rigorously prepared for the toughest race of the season as well. The Audi R18 e-tron quattro has been thoroughly revised with respect to the engine, the hybrid system, its ultra-lightweight design and in other areas. Furthermore, the diesel hybrid sports car will be running with optimised aerodynamics at Le Mans.

Audi is underscoring its role as a technology pioneer with the high-performance LED headlights featuring matrix-beam technology, the digital rear-view mirror with an AMOLED display and other forward-thinking detailed solutions. Audi has been transferring a wealth of innovations from motorsport to its products for more than 30 years. Customers profit from ideas such as quattro four-wheel drive and leading-edge TDI and TFSI engines as well as the most recent innovations in the field of active safety.

The score in the duel between FIA Endurance World Champion Audi and challenger Toyota is currently at 5-3. But although Audi has been unbeaten this year in sports prototype racing to date and set the best time on the test day on June 9, a question mark remains: More than ever before, it is uncertain whether the rating of diesel and gasoline engines is sufficiently balanced to ensure fair relative strengths over the distance. Since January, diesel sports cars have progressively been subjected to more severe restrictions.