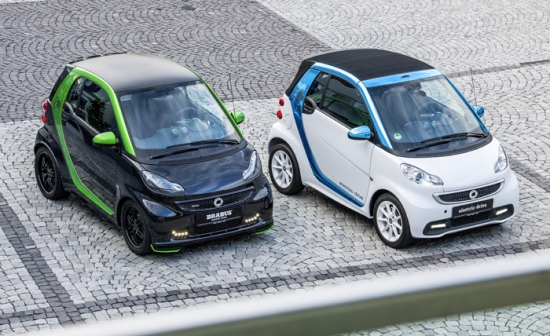 The smart Hambach plant produced the 1.5 millionth smart fortwo. The milestone vehicle, a white smart fortwo electric drive cabrio, rolled off the production line before the beginning of the extended summer break: production will be paused for almost two months in July and August, as massive efforts are being taken to prepare the plant optimally for future production requirements with the renewal of large parts of the production installations.

"1.5 million smart fortwo vehicles underline the uniquely compact smart´s success as city car. It inspires drivers in more and more metropolitan areas around the world, because no other car is so perfectly adapted to urban driving. And with traffic and parking becoming increasingly challenging in these areas, many more smart will follow,“ said Dr. Annette Winkler, head of smart. “Powered by combustion engine or increasingly with fully-electric drive train, as private and fleet vehicle and also as tailored car for mobility concepts like car2go, the smart meets a worldwide demand. As of 2014, we will additionally offer our customers an entirely newly developed four-seated urban mobility car again.”

The massive construction works in the extended summer break mark the largest upgrade which the plant has seen since the start of production in 1998 – among others, a large part of the assembly installations are completely renewed. The new installations, which bring state-of-the-art production technology to the plant, lead to many improvements for flexible processes in various areas of production.

Investment for these upgrades is part of the significant overall investments of more than EUR 200 million for the expansion and modification of the plant plus preparatory measures for the successor series to the current smart, which at the same time secure the plant´s future. One of the largest individual projects with a total investment of more than €50 million is the new paint shop where an environmentally-friendly liquid painting process that meets the current Daimler Group standard for passenger car plants replaced the previous powder painting process. The new paint shop greatly expands the variety of paint colours that can be realised, which means that in future smart customers will also be able to choose the colour of the tridion safety cell of their smart from all available paint finishes.

The smart plant in Hambach was inaugurated in 1997 and has produced the smart fortwo since 1998 – in its second generation since 2007. In 2012 more than 104,000 vehicles rolled off the production line. Approximately 1,500 people work at the site, consisting of about 800 employees at smart France itself and further at the seven system partners on site. The one millionth smart fortwo was built in September 2008, coinciding with the tenth birthday of the brand.

The plant in Lorraine has always stood for an innovative production concept. The assembly line has the shape of a "plus" symbol to enable it to optimally meet assembly and logistics requirements, ensuring highly efficient production processes. This principle enables system partners and suppliers to deliver modules right to the assembly line. Transport and logistics are therefore reduced to a minimum – an advantage not least also in ecological terms.

In addition, the construction principle of the vehicle and a modern energy concept ensure that the smart brand´s ecological product responsibility is translated into the production: For example, smartville has its own thermal power station that produces heat for the plant and covers approximately 25 per cent of its demand for electricity. In the site´s sewage treatment plant, the wastewater is immediately treated at its origin, using a membrane filter system. The quality of the treated wastewater is superior to the quality of the natural waters it is discharged into.

The Evovelo Project Mö Does Not Continue

We regret to announce that, after almost 8 years of development and efforts to offer a simple solar autonomous alternative to private transportation,…

The Eternal Cycle: Speed Fights With Volts And Watts

Speed records with electric vehicles tumble every year, and even with volts and watts it is getting faster and faster. Although this data is not…

The Hawa Electric Van From 1923 Takes Its First Steps

After investing many hours in the restoration of this electric van from the 1920s, this Hawa EM3 has now realized its first road test. And everything…