The smart electric heads the registration […] 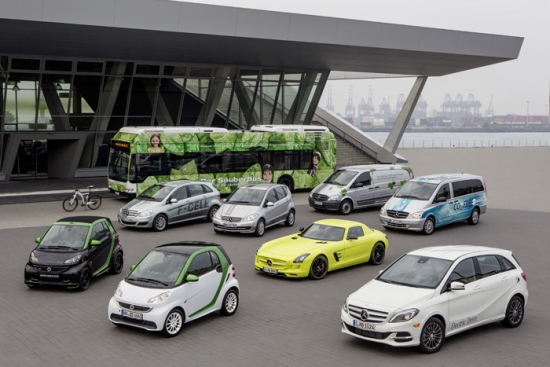 In 2013 Daimler AG is once again asserting its market leadership in electric cars in Germany. In the first half of 2013 the electrically powered models from Mercedes-Benz and smart achieved a market share of 42 percent. The absolute leader is the electric smart, which heads the registration list for electric cars with 983 units and a market share of 40 percent. Compared to the previous year, the company has therefore increased its unit sales of electrically powered models in Germany by around 80 percent.

Now an electrically powered automotive icon, the smart fortwo electric drive has been making its mark on roads around the world with its locally emission-free drive system since as far back as 2007. With a lively 35-55 kW, a top speed of 125 km/h and a range of 145 km, it is the perfect companion for practically any mobility scenario in the city. According to the recent findings of one motoring magazine, it is also the best performer among electric vehicles in terms of operating costs. Customer feedback speaks for itself:

93 percent of all E-smart drivers unreservedly recommend the vehicle. Since 2012 the electrically powered two-seater has been out and about on Germany´s roads with absolutely zero emissions: coinciding with the start of series production of the third model generation, Daimler AG took a wind turbine into operation. Its nominal output of 2.3 megawatts per year is sufficient to generate sustainable electric power for all the smart fortwo electric drive cars sold in Germany.

The variant of the electric drive modified by the vehicle tuner BRABUS brings even more dynamism into the electric smart world. Thanks to a higher output of 60 kW, maximum torque of 135 Nm and a maximum speed of 130 km/h, the two-seater zips along even more enthusiastically. Acceleration from zero to 60 km/h takes just 4.4 seconds, and the speedometer shows 100 km/h after 10.2 seconds.

Electric mobility on two wheels completes the electric portfolio of the smart brand. A 250-watt hub motor by Bionx at the rear wheel assists the rider of the smart ebike up to a speed of 25 km/h. The energy for a range of up to 100 kilometres is stored by a 423 Wh lithium-ion battery. As a recipient of the coveted "Red Dot Design Award", the smart ebike is available for as little as € 2,849. While the rider of the ebike has to operate the pedals, the next two-wheeled product from smart requires no muscle power at all: the smart scooter.

Locally emission-free with the Mercedes star
This year the latest addition to the Mercedes E-model range has celebrated its world premiere in the USA. Due to be launched from 2014, the B-Class Electric Drive impresses with locally emission-free driving pleasure and no compromises, plus the usual high Mercedes standard of safety and comfort for up to five occupants. The B-Class Electric Drive generates a peak output of over 100 kW and, with acceleration from zero to 100 km/h in under ten seconds, demonstrates that electrically powered vehicles are by no means "slouches", but on the contrary capable of dynamic performance. Its top speed is 160 km/h, the operating range around 200 kilometres.

The sheer fascination of E-mobility is embodied by the Mercedes-Benz SLS AMG Coupé Electric Drive. Presented at the 2012 Paris Motor Show as a limited series production version, the world´s most powerful electric super-sports car can now be ordered by customers and continues to impress, not least with its outstanding performance figures: an output of 552 kW, maximum torque of 1,000 Nm which is available right from the start as in all electric models, and acceleration from zero to 100 km/h in 3.9 seconds. It has a range of around 250 kilometres. This super sports car achieved a lap time of 7:56.234 minutes on the North Loop of the Nürburgring, setting a record in its class. The SLS AMG Coupé Electric Drive is available for € 416,500.

As a pioneer in the field of fuel cell technology, Daimler AG produced the first of around 200 examples of the B-Class F-CELL (100 kW/136 hp, range 380 kilometres, top speed 170 km/h) in Rastatt back in 2009. During the Mercedes-Benz F-CELL World Drive 2011, the technology impressively demonstrated its high level of maturity over more than 30,000 kilometres around the globe. Since the presentation of the first prototype in 1994, the company remains committed to this high-potential technology on the road to sustainable mobility. The partnership with Ford and Nissan further underscores the company´s determination to bring the technology to market. From 2017 the first competitive series production models with fuel cell power are to be available on a broad basis.

Electric drive also for commercial vehicles
In addition to passenger cars, Mercedes-Benz also offers a range of electrically powered commercial vehicles. Series production of the Vito E-CELL, for example, commenced as early as 2010. The electrically powered Vito is now available in 15 European countries. The van is powered by a 60 kW electric motor (maximum torque 280 Nm). The lithium-ion batteries with a capacity of 36 Kwh are located beneath the load compartment floor so that load capacity is not restricted and a maximum payload of 850 kilograms is possible. A top speed that is limited to 89 km/h allows a range of 130 kilometres.

The Fuso Canter E-CELL is also part of Daimler´s electric vehicle portfolio. It is powered by a 70 kW electric motor and has a range of 120 kilometres. The award-winning, emission-free Mercedes-Benz Citaro FuelCELL Hybrid city bus, which has been servicing urban public transport networks in European cities since 2011, also demonstrates that fuel cell technology is suitable for use in large vehicles. Freightliner in the USA offers the Custom Chassis MT E-CELL All Electric.