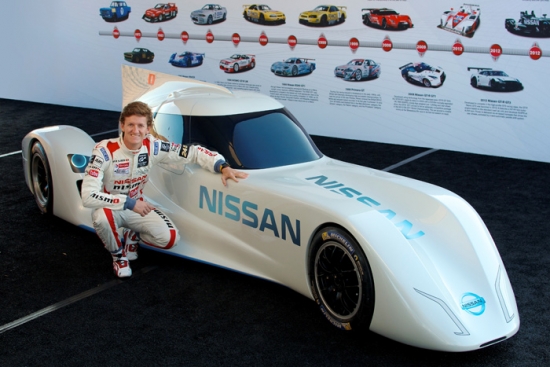 The Spaniard Lucas Ordoñez with the Nissan ZEOD RC


Nissan´s inaugural "gamer-to-racer" Lucas Ordóñez has been appointed as the official test and development driver of the Nissan ZEOD RC programme - the unique electric race car that will debut at next year´s Le Mans 24 Hours.

Launched at Le Mans in June this year, the Nissan ZEOD RC will make its race debut at next year´s 24 Hours event. It will hit the track for the first time next month for testing with Spaniard Ordóñez entrusted with the development duties for the car.
The 28-year-old won the inaugural Nissan PlayStation GT Academy competition in 2008 and has gone on to become one of the star Nismo Athletes with Le Mans 24 Hours podiums, a championship win in the 2011 Intercontinental Le Mans Cup and a third place recently at the Spa 24 Hours for Nissan with an all-gamer line-up of GT Academy graduates.

In addition to racing in this year´s FIA GT Series and the Blancpain Endurance Series, Ordóñez has also made appearances in the World Challenge Series in the US, the Japanese SUPER GT championship and also recently tested a V8 Supercar for the Nissan factory squad in Australia. The appointment of Ordóñez was announced at the Nissan 360 global media event in California.

"To work again with this group and to be part of this project for Le Mans is amazing. To actually start from the beginning of the project is just a dream for me. I´m really looking forward to working with the team to develop all the new technology in the ZEOD RC and to develop the car on track. It´s a unique experience. I really like to learn from engineers, learn from teams and learn about new products like this because we get to do so much testing. That´s what I need as a racing driver right now. I´ve been proud of my pace competing against all of the other drivers but now it´s time to go one step higher in my career in developing the ZEOD RC," Ordoñez said.

Nissan´s Director of Global Motorsports Darren Cox believes that Ordóñez will make a valuable contribution to the development of the new ground-breaking race car.

"The fact that Lucas didn´t enter the sport the traditional way through karting and junior formulas actually makes him ideally suited for the development role for the Nissan ZEOD RC. Lucas was the first to prove that the GT Academy concept works and the succession of Nismo Athletes that have graduated since that time has continued to show the programme is extremely valuable in unearthing and developing new talent. The Nissan ZEOD RC is unlike any racecar previously developed and Lucas doesn´t have 10 or 15 years of pre-conceived ideas as to what a race car should or shouldn´t do. Our goal to electrify Le Mans is just the first step in changing the face of motorsport and making it relevant to what we drive on the road and we´re thrilled to have Lucas playing a key role in that process."

The first chassis for the Nissan ZEOD RC was recently completed and final construction of the unique car is currently underway. When it runs for the first time next month, the ZEOD RC will be in full electric-only mode.

Nissan is testing a number of electric drive-train solutions during the development of the car before locking in the package for next year´s Le Mans endurance classic.