to continue with the quattro tradition […] 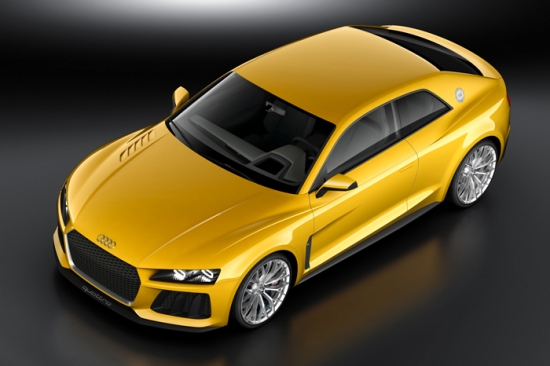 In celebration of the 30th anniversary of the Sport quattro - the musclebound short-wheelbase coupe originally conceived for the rally stages - Audi will unveil its conceptual successor at the 2013 Frankfurt Motor Show. The Audi Sport quattro concept show car continues the grand quattro tradition, with a stunning coupe silhouette and plug-in hybrid drive delivering a system output of 700PS.

Its taut, sinewy body squats purposefully on 21-inch centre-locking wheels with a five twin-spoke design, and its low-slung, foursquare look is largely attributable to an overall  length of 4,602 millimetres, a generous width of  1,964 millimetres and a height of just 1,386 millimetres, underpinned by a wheelbase of 2,784 millimetres.

The plug-in hybrid drive endows the Sport quattro concept with truly breathtaking performance from a mighty system output of 700PS and system torque of 800 Nm (590.05 lb-ft). Power flows through a modified eight-speed tiptronic transmission to the quattro powertrain, which features a sport differential on the rear axle. According to the applicable standard, the show car is also capable of up to 113mpg, equating to CO2 output of 59 grams per kilometre.

The combustion engine is a 4.0-litre, twin-turbo V8. It produces 560PS and 700 Nm (516.29 lb-ft) of torque. The cylinder on demand (COD) system, which deactivates four cylinders under part load, and a start-stop system make the sonorous eight-cylinder unit very efficient.

Located between the 4.0 TFSI unit and the transmission is a disc-shaped electric motor producing 110 kW and 400 Nm (295.02 lb-ft). It draws its traction energy from a liquid-cooled lithium-ion battery in the rear with a capacity of 14.1 kWh. The show car is charged via an Audi wall box, which uses intelligent charge management to ensure the optimal feed of energy to the lithium-ion battery. The Audi Sport quattro concept can cover up to 31 miles on electric power alone. An intelligent management system controls the interplay between the two drives as needed, and the driver can choose between various operating modes.

The customer can choose between various characteristics for the Audi Sport quattro concept depending on the operating and driving strategy. A choice of three modes is available. EV mode is for purely electric driving; Hybrid mode for maximum efficiency and Sport mode for maximum performance.

In EV mode, only the electric motor is active. With a peak electric output of 110 kW and 400 Nm (295.02 lb-ft) of torque, electric driving both inside and outside the city is possible. An active accelerator indicates the transition to hybrid operation to the driver so that he/she can consciously control the switch between electric and hybrid driving modes.

In Hybrid mode, environmental and route data are used to compute the optimal use of the electric motor and combustion engine for fuel efficiency and implement this via the operating strategy. If navigation is active, the route is optimised for efficiency. This mode also includes the ability to customise the operating strategy. If the driver wants to retain a certain amount of electric range or to drive certain route segments on electric power, they can use the Hold or Charge function to precisely adjust the charge of the battery even without charging from the power grid.

In Sport mode, the operating strategy sets the drive system for maximum power and performance. The electric boost function supports the combustion engine in all driving situations. The energy management system ensures that the battery always has sufficient charge.

When the V8 and the electric motor work together, the Audi Sport quattro concept accelerates from 0 to 62mph in 3.7 seconds – much like the powerful Audi rally cars once did. Its top speed is 189mph.

The show car´s chassis is easily able to handle the drive system´s power. Handling is as dynamic as it is stable. The front suspension features five control arms per wheel; the rear suspension follows the Audi track-controlled trapezoidal link principle. Tautly tuned springs and dampers connect the Audi Sport quattro concept firmly to the road. The dynamic steering varies its ratio as a function of driving speed. The brake callipers grip large, carbon fibre-ceramic brake discs, and the tyre format is 285/30 R 21.

Combining awe-inspiring power and performance delivered with 21st Century efficiency with styling that speaks volumes about its exceptional capabilities, the Sport quattro Concept is an undeniably worthy successor to the legendary Sport quattro, which made its debut at the 1983 Frankfurt Motor Show. Designed as a homologation model for the World Rally Championship, this exceptional 306PS powerhouse showcased many technical innovations, and was considered the supercar of its day. Its short wheelbase honed its handling and gave it an unmistakable look, and in competition form it wrote racing history. Walter Röhrl drove it to a convincing victory in the 1987 Pike´s Peak International Hill Climb in Colorado, U.S.A.