New energy storage technology has potential to provide up to 15 percent fuel savings in vehicles. […] 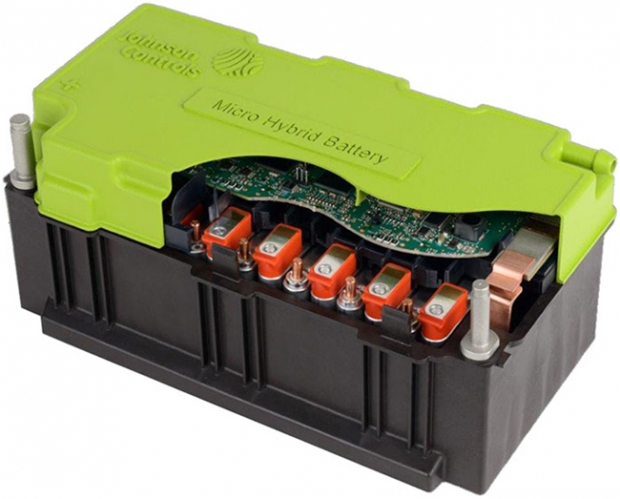 Featuring a dual voltage architecture, Johnson Controls Micro Hybrid battery system will involve a 12-volt starter battery and a 48-volt Lithium-ion battery that enables optimization of energy generation and consumption. This technology has the potential to provide up to 15 percent fuel savings in vehicles and will be available for testing with key automotive customers in December.

“Micro Hybrid systems will be able to support the automotive industry´s needs at a much lower cost than hybrid or electric vehicles, and therefore, offer a mass-production solution that can be leveraged across our customers fleets,” said Shemanski.

The 48-volt battery is designed with the capacity to quickly capture energy from braking and can support higher loads such as air-conditioning and active chassis technologies. The 12-volt battery will continue to provide power to the vehicle starter, interior and exterior lights, and entertainment systems such as radios and DVD players.

The prismatic Lithium-ion cells and complete systems for the Micro Hybrid battery prototypes will be made at Johnson Controls advanced manufacturing facility in Holland, Michigan. The battery is designed with standardized components and size to help drive scale and minimize cost.

“We expect that Micro Hybrid technology will be adopted in Europe first, due to more stringent fuel economy and emissions standards, and then quickly move to U.S. markets in the next few years with global adoption starting in 2020,” said Shemanski