The final test for significant hybrid drive for Range Rover before coming to production. […] 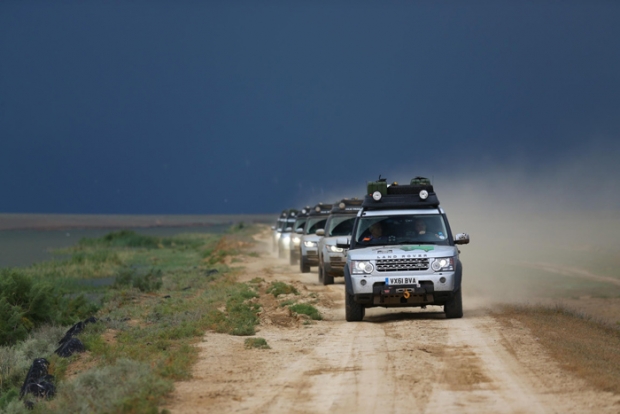 Share
The final test for significant hybrid drive for Range Rover before coming to production.

Highlights from Land Rover´s Silk Trail 2013 expedition, travelling 10,000 miles from Solihull, UK, to Mumbai, India and taking-in the legendary Silk Road trading route that first connected Asia with Europe more than 2,000 years ago. This epic journey is the final validation test for prototypes of the new Range Rover Hybrid before the model is signed-off for production.

Twenty days after setting-out, the three Range Rover Hybrid prototypes vehicles have reached the deserts of central Asia on the ancient Silk Roads that inspired the name and route of this epic journey. The convoy has covered 5,226 miles (8,411 kilometres) and in its third week it travelled through Kazakhstan and much of Uzbekistan, lands of Arabic and Oriental people and cultures.

The Range Rover Hybrids, in their final validation test before sign-off for production, have taken in their stride a variety of punishing conditions: asphalt surfaces riddled with deep potholes and layered with small stones; mud tracks that have been dry and rutted or wet and slippery; and dusty desert trails sometimes hard as gravel and sometimes soft as sand.
While coping assuredly with such mixed terrains, in temperatures ranging from 17 to 43 degrees Centigrade, the seven vehicles have demonstrated outstanding reliability and between them suffered just one cracked windscreen and four punctures. Unlike other hybrids, the Range Rover carries a full-size spare wheel and tyre.

With its parallel 3.0-litre SDV6 diesel engine and 35kW (47bhp) electric motor, the Range Rover Hybrid models have returned impressive fuel economy for a vehicle so spacious and powerful - and so heavily laden, including roof-rack mounted expedition equipment. Fuel Economy has been put to the test on the water-logged mud tracks of the Kalmykiya grasslands in eastern Russia, so sticky that they were impassable to other vehicles, yet the vehicles are still recording more than 40 mpg on asphalt highways and busy urban roads through Russia and Uzbekistan.

With 29 days to go to reach Mumbai, the convoy rested on its 23rd day in Uzbekistan´s capital city, Tashkent. The second half of this ambitious journey will feature the deserts, highlands and lowlands of Kyrgyzstan and China; winding tarmac roads climbing high into the thin cold air of the Himalaya mountain range; and a gradual descent through the lush greenness of Nepal to the hot plains of India. The expedition is due to enter Kyrgyzstan, the 11th of 14 countries on the Silk Trail 2013 route, two days after leaving Tashkent.