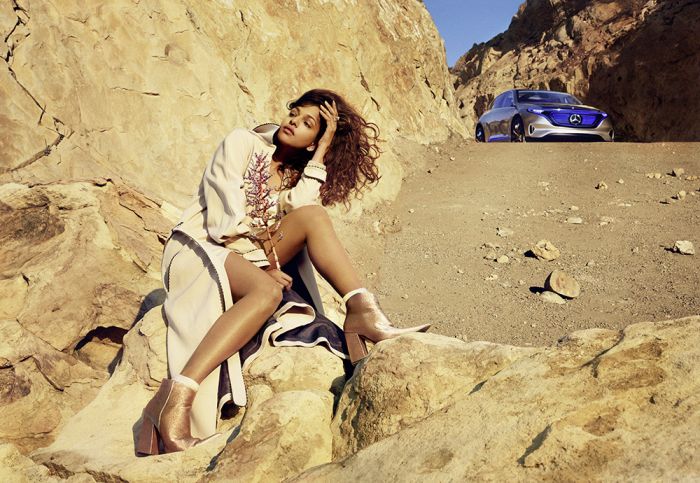 Compartir
Mercedes-Benz announces the launch of #mbcollective – Chapter One, showing the new Concept EQ, shot by photographer, writer and filmmaker Luke Gilford. Titled Generation Now, Generation Next, the new #mbcollective fashion story for 2017 is divided into three chapters, and will unite international talent in the form of three protagonists (Generation Now) and their accompanying protégés (Generation Next), to be released globally throughout the year.

Chapter One features the British musician and artist M.I.A. and her protégé, the emerging Canadian rapper Tommy Genesis. All the international talent together with Luke Gilford and the emerging fashion designers, whose pieces feature in the campaign, comprise the first members of the burgeoning #mbcollective – a group of influencers, trendsetters and designers who will amplify Mercedes-Benz’ global fashion engagement and use their extensive social following to communicate their activities and embody Mercedes-Benz’ core initiative CASE (Connected, Autonomous, Shared & Services and Electric).

2017 sees Mercedes-Benz conclude their traditional format of two seasonal campaigns, adhered to for the last nine years, in order to adopt a new, season-less, direct line of communication with their audience globally. Mercedes-Benz will continue to evolve and revolutionize by focusing on content creation across digital and social media, with assets, including video, behind-the-scenes images and events released and hosted throughout the year.

“Like the automotive sector the fashion industry is currently facing major changes characterized by increasing digitalization of media in a fast-paced world. With our new fashion story #mbcollective we strengthen and prolong the engagement with our target group by releasing three campaign chapters throughout the year”, says Dr. Jens Thiemer, Vice President Marketing Mercedes-Benz Cars.

The theme of Mercedes-Benz' 2017 global fashion engagement, Generation Now, Generation Next, puts the new generation battery-electric Concept EQ in the spotlight, almost as a voyeuristic witness to the scene, sharing the moment without actively participating. The Concept EQ, with its sporty SUV coupé appearance, has its own distinctive “electro-aesthetic” styling that sets it apart. The brand EQ stands for “Electric Intelligence” and the chapters accordingly play on that Leitmotif, exploring the emotional growth that human connection and relationships stimulate. Each chapter, documenting the different stages of a relationship and punctuated by the three talent partnerships dressed in the designs of emerging design talent, links back to Mercedes-Benz’ brand values intelligence and emotion.

The first talent partnership sees M.I.A. and her protégé Tommy Genesis exploring Mercedes-Benz’ CASE theme of Connectivity through a neutral filter. The first tableau captures the purest point of a relationship: the first impression, the initial connection, signified in the light of dawn, filled with soft, awakening tones.

M.I.A. is a British singer-songwriter, director, visual artist, activist, photographer, fashion designer, model and philanthropist who began her career in 2000. Her genre-defying style has seen her nominated for an Academy Award, three Grammy Awards and the Mercury Prize. M.I.A.’s pioneering spirit of philanthropy, which aligns with the Mercedes-Benz theme of Human Benefit, also sees her support Youth Action International, an organization that seeks to rebuild war-torn African communities, and the Pablove Foundation, an organization that fights pediatric cancer. One of the more outspoken artists, she chose Tommy Genesis, a Canadian rapper whose recently released album ‘World Vision’ received international acclaim, as her protégé. M.I.A. is a supporter of female emerging talent, specifically within the music industry, and seeks to pave the way for strong and alternative female musicians. Speaking of her passion for encouraging developing talent, M.I.A. says “When it comes to dealing with a unique musicians like Tommy, who go against the grain – I like to reassure them that their individuality is their main asset, they can be who they want to be and should embrace being unique, they’ll be okay.” Tommy Genesis encapsulates the new generation who are preternaturally confident in their own skin. Theirs is a partnership built on trust, mutual respect, and a pooling of talents. Their mentor-mentee dialogue therefore speaks directly to the Mercedes-Benz brand strategy and supporting themes of Connectivity, Sustainability and Human Benefit.

Tommy Genesis said: “It is such a privilege to have been chosen to feature in this Mercedes-Benz fashion story alongside M.I.A., an icon of the music industry whom I have always respected and admired. Being able to connect with an artist with so much experience, and share her wisdom and knowledge, made possible by Mercedes-Benz, is an incredible opportunity. And being able to promote emerging designers in the process is an added bonus, I think it is important that our generation really supports one another.”

The fashion story was shot in Malibu, on the Wright Ranch property. A 24‑acre compound in the mountains, Wright Ranch comprises the work and living spaces of 87‑year-old Eric Lloyd Wright, grandson of the iconic American architect Frank Lloyd Wright. The property demonstrates the family’s allegiance to organic architecture, with buildings constructed to harmonise with the natural landscape, and recycled building materials incorporated where possible, encapsulating the emphasis Mercedes-Benz places on sustainability. The key attraction is a monolithic unfinished concrete dwelling with stunning views over the sea.

All three chapters were shot by Luke Gilford, a photographer, writer, filmmaker and Santa Cruz native, who chose Malibu for its incredible range of light that will give life to numerous moods, colours and energies. A leader in the new generation of filmmakers who boldly explore a wide variety of media, Gilford is fascinated by “the polarities of California culture” and has collaborated with Prada, Proenza Schouler and Maison Martin Margiela. For Gilford, the project was about energy. “It was important to me to emphasize the emotional intelligence of the Concept EQ. To do that, I wanted to make the human connection between M.I.A. and Tommy Genesis the heart of the story, illustrating their exchange of energy and inspiration. I wanted to make their connection feel honest and raw -- like the beginning of an amazing relationship.”& amp; amp; amp; amp; lt;

In-line with Mercedes-Benz’ commitment to supporting and nurturing emerging design talent, the chapters will feature the work of designers who have benefitted from mentorship in the past as part of the Mercedes-Benz International Designer Exchange Programme (IDEP). This programme offers designers the unique opportunity to present their collections outside of their local markets to an international audience. Anna October, Steven Tai, William Fan, Xiao Li and Ran Fan contributed designs which will be worn by the burgeoning #mbcollective in all three parts of the campaign.

Dr. Jens Thiemer, Vice President Marketing Mercedes-Benz Cars, says: “For more than 20 years we have been committed to the promotion of creative and talented people within the fashion industry, specifically through the International Designer Exchange Program (IDEP). The IDEP platform connects creative talents with a truly international audience, a stepping stone in their individual career.”

Generation Now, Generation Next was produced as part of the International Fashion Engagement for Mercedes-Benz. Chapter 2 of the fashion story will be released in June 2017.
TagsMercedesTommy Genesis