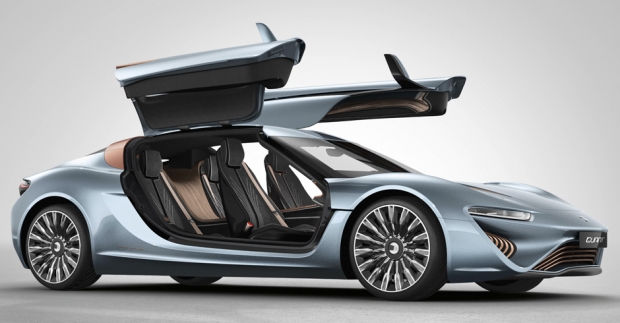 Share
The new QUANT e-Sportlimousine - with its new powertrain and energy storage concept ¬- is a quantum leap in the development of electric mobility. The state-of-the-art design of its carbon monocoque body gives the car a hot-blooded elegance. The first prototype built by nanoFLOWCELL AG is a breath of fresh air, and not just for those in the alternate drive-train scene.

Built around an extremely stable monocoque composed of carbon-fibre structures, the four-seater with gull-wing doors is an innovative and intelligent vehicle concept for electrical mobility. The two-metre long gull-wing doors give access to both front and back seats. The first gull-wing four-seater in automotive history combines, with its innovative drivetrain concept, the most advanced elements in the development of mobility today. Four electric motors, one per wheel, draw their power from a completely new battery system that is guaranteed to draw the attention of scientists and researchers around the world: The nanoFLOWCELL® energy storage system works on the proven principles of the redox flow-cell, but the nanoFLOWCELL® extends the technical characteristics and possibilities of this technology to new heights.

Flow cell systems are in regular use today for terrestrial applications like storing solar energy for domestic residences or storing wind energy for use during the next lull in winds. Until now, flow cells based on redox principles have been too heavy and their energy conversion rates too sluggish for use in mobile applications.

This is where the nanoFLOWCELL® technology opens the door to a broad palette of new technical opportunities. The improvements that have given the system such a major performance boost are the result of research into the quantum chemistry of electrolytic fluids. The most important innovation of the nanoFLOWCELL® is in its significantly higher charge- and power-density thanks to an extremely high concentration of ionic charge carriers in the cell system's electrolyte.

The approach that made the nanoFLOWCELL® system's rapid advances possible was based on extensive research activities in the nanoFLOWCELL AG's DigiLab simulation lab in Zurich, Switzerland. This is where mastermind and director of development, Nunzio La Vecchia, and his team have been investigating key aspects of quantum chemistry through molecular engineering. Years of experimentation went into simulating and digitally testing charge transport mechanisms, then synthesising and real-world testing of the resulting materials.

Development of the prototype's powertrain concept being shown in Geneva will continue for the nanoFLOWCELL AG as a part of the overall vehicle concept. The production of four more prototypes for research and development is planned for 2014. The small team at nanoFLOWCELL® AG has big challenges ahead of it and is working with major partners to further optimise the technologies presented here. The challenges include bringing the current system to series-production readiness and thereby establishing it as the powertrain of the future.


You can support me and my articles by donating the amount you want.
I will be very grateful.