At the Motorcycle Show in Milan (EICMA) in November 2016 the legendary Spanish brand Bultaco, known […] 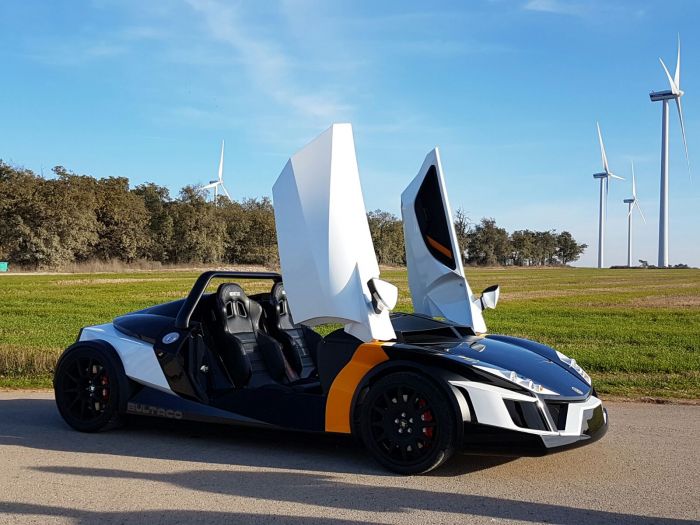 Bultaco Linx, the fourwheeler from the legendary brand

Share
At the Motorcycle Show in Milan (EICMA) in November 2016 the legendary Spanish brand Bultaco, known for its range of electric motorbikes Brinco, has presented a sports car par excellence, without windshield and without side windows, with a 400 hp engine to bring the spirit of motorcycles to a car, which as presented, also needs a helmet to drive it.

It has a gasoline engine, of course, and with it, Bultaco slightly breaks its purpose for electric vehicles, but neither the compnay has never been proposed to manufacture a car. We firmly believe that: if this project goes ahead and has the desired success, the company will develop special electric sports cars.

The Linx car with its engine from Volkswagen, a 2.0 TSI with 400 hp, a six-speed sequential DSG gearbox, only weights about 800 kg thanks to its aluminum chassis and composite body. This promises extraordinary performances, such as an acceleration of 0-100 km/h in 3.7 seconds and a top speed, strangulated, of 280 km/h.

We have been very attracted to the fact that Bultaco has created its own automobile department, Bultaco Cars, and that the company also foresees the preparation of its own production plant, where, from the end of this year, about 50 units will come out of this car at a sale price of about € 100,000.

The director of the new department is Miguel Angel Rodriguez, who 8 years ago, introduced me the designs and photos of his first car, the Linx, named in this way in honor of the Iberian lynx, with the idea of publishing the creation of this car abroad, and so it was. The Spanish Linx has been in international catalogs since 2009!

I am personally pleased that the project of Miguel A. Rodriguez has entered the final phase, since in 2010 he still wrote me that the project is progressing very slowly due to lack of funding. Two years later I had to cancel the publications it in the international catalogs since the project did not continue ...

In 2010 this car had an American V8 engine of more than 400 hp ... and it was thought to manufacture it in the south of Spain, since at that time only Andalusia offered possibilities and helped in the creation of small companies. But finally the model has returned to its place of origin, Barcelona, and even more, to Mollet del Vallés, where it was conceived and where the production plant is planned.

From our milieu our best wishes for the success of this project, and the congratulations to all who participated so that finally such an interesting concept could see the light.
You can support me and my articles by donating the amount you want.
I will be very grateful.