Speed records with electric vehicles tumble every year, and even with volts and watts it is getting […] 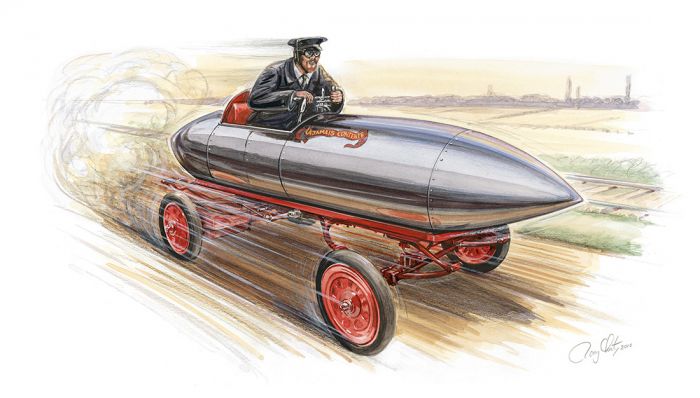 The Eternal Cycle: Speed fights with volts and watts

Share http://www.vchristianmanz.com
Speed records with electric vehicles tumble every year, and even with volts and watts it is getting faster and faster. Although this data is not usable, as the record-breaking vehicles have little in common with today's electric production vehicles, the races nevertheless help to improve components, motors and batteries and ... above all, they also give the electric vehicle the flair of speed, the emotions that come from the gut, which we in the world of automobiles, especially when they are environmentally friendly now, always need. That was already the case before!

The first automobile to break through the dreaded speed of 100 km/h was an electric vehicle. And this already in 1899! A typical test of strength among men who possessed enough cash to push the development of vehicles. The French Count Chasseloup-Laubat worked together with Charles Jeantaud, the first French serial manufacturer of electric vehicles, to defeat his challenger, the Belgian Camille Jenatzy, who built electric taxis in his Parisian company Compagnie Genérale des Transports Automobiles. After the engines and battery power had reached their limits, both worked on aerodynamic formulas without knowing them and on new materials to make their vehicles lighter. The result was the rocket shape for the Jenatzy and the wedge shape and underbody protection for the Jeantaud. And the use of a special aluminium alloy for the body.

The Jeantaud soon reached over 90 km/h, but the Belgian did not give up and arranged a demonstration drive on a section of the road from Achères to Paris, for April 1899. Jeantaud and Chasseloup-Laubat remained spectators, the doctors warned the Belgian not to exceed the sound barrier of 100 km/h, as they assumed that at this speed the body fluids could harden. The religious people prayed to heaven, convinced that the good Lord would send lightning and thunder. During the first passage on April 1, the speed could not be measured, probably for reasons of shock, which led to another attempt a few days later. On April 29th the record of 105.85 km/h could be set. The red-haired Belgian survived this unscathed, but nevertheless both opponents agreed that they would stop their attempts. It took two years for an automobile to reach this high speed again, it was a steam car from Serpollet.

The American manufacturer of electric vehicles Baker from Ohio not only built numerous electric vehicles, but was also a specialist in ball bearings, which he incorporated as a major innovation in his models to reduce the friction of the technical parts. In 1902 he wanted to build the fastest electric vehicle in the world that could safely transport two people on the road. A long, robust chassis, with batteries at the front and rear, had a torpedo-shaped body, large wheels and many ball bearings. The two occupants sat in a small closed interior, both additionally protected by a helmet made of mica. As the vehicle could reach at least 150 km/h, it needed good steering, precise but light to keep it on the road. While Walter Baker steered the car and operated the brakes, his co-driver controlled the volt and speedometer.

On the day of the performance at the South Shore Boulevard Grand City, in Staten Island, the car briefly reached 160 km/h - far too much for the numerous spectators who did not hear a roaring engine, but only a buzzing sound that approached dangerously fast. Some people jumped over the barrier and Baker had to initiate an emergency stop: first a short circuit, then the mechanical brakes. The effect was so strong that the vehicle could hardly be kept on course, a reaction that hit the spectators unexpectedly. The people were not prepared for the buzzing speed, is that what we are today?

Between 1902 and 1903 two more Baker racing cars were used, the small light torpedo kids, which achieved new speed records with their aerodynamic bodywork, but which were never recorded and confirmed. According to Baker, the shape was created by looking at an oil drop that is not round but rather elliptical, which gives less resistance to the wind. Compared to other racing cars in those years, they looked like models from another world.

More than 90 years later, in 1994, Nuccio Bertone presented its ZER (Zero Emission Record), a revolutionary record vehicle with 34 FIAMM lead-acid batteries embedded between the wheels. The drag coefficient of the vehicle was Cw 0.12, the frontal area was barely 0.62 m2, the weight 890 kg. On May 21, 1995, the ZER broke the 300 km/h mark with a value of 303.997 km/h on the NARDO circuit of Lecce, with Oscar De Vita at the wheel.

At that time, there were two tough competitors who tried by all means to break the records for electric vehicles. The English team with the pilot Donald Wales and various versions of their Bluebird racer, which had been trying to break the 300 km/h mark since the early 1990s (helding the British record of 224 km/h for years), and the also British team of Mark Newby and Colin Fallows, who in cooperation with ABB wanted to bring their e=motion racer with over 500 HP output to over 450 km/h. It was - and still is - anything but easy to achieve such high speeds with an electric drive, with the same problems as in former times: the harmony of drive train, batteries and management.

Since 2016, the speed record of an electric vehicle was officially 576 km/h (continuous speed over 1 mile at 549.43 km/h), achieved by the French Venturi VBB-3 (Venturi Buckeye Bullet), more like a rocket than an automobile - but, as you can compare, it was no different back then: even the Jamais Contente by Jenatzy looked more like a rocket. Thus the eternal cycle of rebirth, of the Sánsara, as the Indians call it, closes again.

Photos:
Cover: Camille jenatzy on his "Jamais Contente" during the record ride in April 1899, drawing by the German artist Rony Lutz, who lives in Sweden  Courtesy: Rony Lutz
01: The Frenchman Chasseloup-Laubat at one of his last record attempts on Jeantaud of 1899 - already with the wedge shape of 1899.
02: Camile Jenatzy at the victory celebration - contemporary pictures
03: The Baker racing car reaches 160 km/h in 1902 - contemporary picture
04: The little Baker Torpedo Kid looked like coming from another galaxy
05, 06: Bertone ZER pasing the 300 km/h  Press Photos/Archivo Manz
07: Donald Wales on its Bluebird
08, 09: Since 2013 Venturi tried to set a speed record on the salt lake of Bonneville, in 2016 it was finally done. The new version VBB-3 could break the record of its predecessor VBB 2.5. Press photo/Archivo Manz
You can support me and my articles by donating the amount you want.
I will be very grateful.