The Detroit Electric branch is back with an exciting two-seater […] 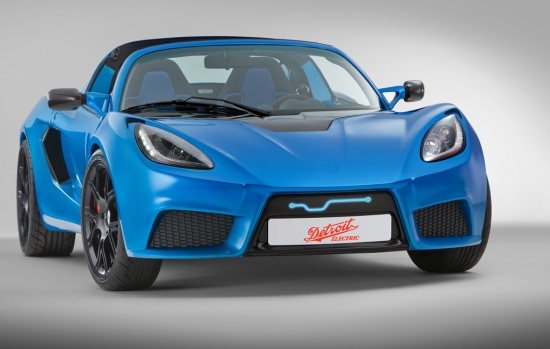 Emissions-free motoring has a new high-performance champion following the unveiling of the Detroit Electric SP:01, a limited-edition, two-seat pure-electric sports car that sets new standards for performance and handling in the electric vehicle (EV) segment.  Boasting an impressive 155 mph (249 km/h) top speed and covering the  0-62mph (0-100km/h) sprint in a blistering 3.7 seconds, the SP:01 is the world’s fastest pure-electric production car.

To deliver instantaneous torque for breath-taking acceleration, the SP:01’s innovative powertrain creates an electromagnetic field around the rotor shaft, which then spins at varying speeds to drive the wheels.  Drivers can select one of four gear ratios for optimal acceleration, but unlike a manual shift in a conventional car, there is little need to change gear regularly to ensure brisk progress.

With an impressive energy storage capacity of 37 kWh, the battery gives the SP:01 a range of almost 190 miles between recharges, when tested to the New European Driving Cycle (NEDC) standard.  Detroit Electric’s home charging unit will enable drivers to charge their SP:01, with full charge achieved in 4.3 hours.  Rigorously tested by Detroit Electric for use in the SP:01, the battery technology also has been deployed successfully in other highly demanding applications, notably in helicopters and submarines.

The SP:01 sports car is the first production vehicle to be marketed under the Detroit Electric brand since 1939.  On sale in many of Detroit Electric’s target markets by end of August, the SP:01 will herald a new family of all-electric production cars, including two other high-performance models that will enter production by the end of 2014.

The price of SP:01 starts at $135,000 USD, and will vary according to specification and local taxes. Each SP:01 will come with a three-year, 30,000-mile warranty with an optional extension for the battery to five years and 50,000 miles.

The SP:01 will be produced at the new Detroit Electric production site in Wayne Country, Michigan.  The dedicated facility will have an annual capacity of 2,500 vehicles and create over 180 manufacturing and sales-related jobs over the next year.

The original electric car innovators, Detroit Electric began life in 1906 and established itself as the market leader and most prolific manufacturer of electric cars.  Detroit Electric went on to make some 13,000 vehicles by 1939 and holds the electric vehicle production world record for the twentieth century.

Prestige Electric Car in its immense historical files of the development of environmentally friendly vehicle from its origins has pictures of the old Detroit Electric and an original catalog of that time, available to perform an exhaustive historical report on the brand. Text and photographs / images are available for publication subject to fees. Interested parties can contact on [email protected]