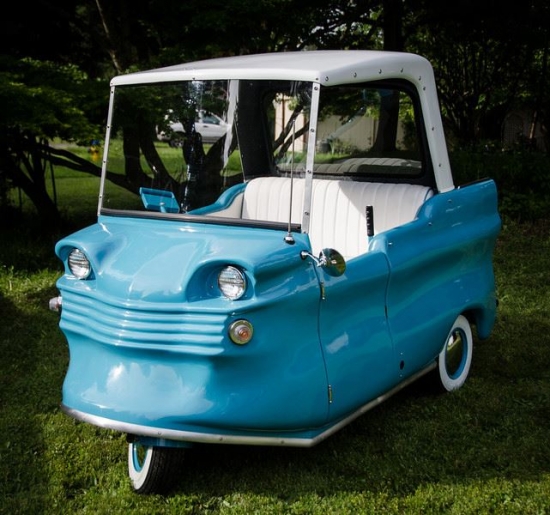 Share
A 1960 “Electric Shopper” electric micro car owned by Roderick Wilde, Executive Director of the Historic Electric Vehicle Foundation, will be the first vehicle you see when you enter the California Automobile Museum’s (2200 Front Street, Sacramento) new exhibit titled: “It’s Electrifying! Alternative Fuel Vehicles in California” which will run from February 15th through June 15th”. Thanks to Larry Fisher, who prepared the story about this microcar:

The Electric Car Company of California, Inc. opened at 495 Alamitos Street in Long Beach, California in 1951. The company was started by several individuals who had gained experience working for other electric shopping car manufactures. Elmer Woodring took the role of Treasurer of the new business while Harry R. Casteel served as Vice President and L. Fred Wasson as President. Elmer Woodring and Harry R. Casteel had both worked as salesmen for Autoette Sales & Service Co. during the late 40s.

Clearly, the new firm set out to copy the Autoette line eventually producing a line of “pleasure cars,” industrial cars, and the Electric Golfer.The pleasure cars were marketed under the name Electric Shopper denoting their convenience and intended use. The line also included light trucks flatbed carriers and even an eight passenger personnel carrier for use at country clubs, factories, airports, resorts, amusement parks and more.

In 1960 the company, under the leadership of their new President, Byron T. Cline, unveiled their newest model, the FG-75, designed to compete with the recently unveiled Taylor-Dunn Trident, a fiberglass, late 1950's styled shopping car. The “New” Electric Shopper was described by the maker as “A dramatic departure from the Electric Car design as you have known it.” The new look offered “a low, sweeping silhouette of the distinctive new big cars. Silent while in motion, yet strong in construction, the same Electric Shopper dependability you have enjoyed for more than 25 years.” The claim of 25 years being a bit of an exaggeration, the company never let the facts ruin a good sales pitch.

The Model FG-75 Electric Shopper weighed in at a hefty 700 lbs., and was driven with a 1.5 HP, 24 Volt DC Series Wound Electric Motor. Speed as advertised was 18 mph with a range of 30 to 35 miles on a single charge. Popular options included foot controls in lieu of the standard hand controls, a removable fiberglass top, windshield, and side curtains for inclement weather.

Alas the “New” Electric Shopper would be short lived when in late 1962 Byron Cline decided to sell to former employees Elmer Woodring and Wilfred Billard who were consolidating several businesses under the Electric Car Sales & Service name thus ending the run of the Electric Shopper.