published in 2004:KAZ means peace in Japanese, and the concept the Keio University offers […] 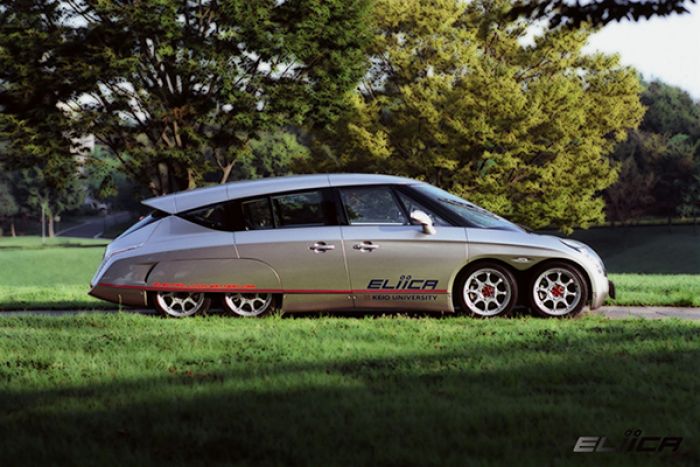 KAZ means peace in Japanese, and the concept the Keio University offers for a future car is much more than a simply idea who future cars will be: the KAZ breaks all the known ideas and demostrate clearly that an electric car can be very exciting and quite more efficent than people think. And this car can have a very very long life.

Hiroshi Shimizu , engineer and professor at the prestigious Keio University in Kanagawa (Japan) is not a stranger in the field of electric vehicles. His IZA electric car, created in 1991, holds the speed record for an electric car with 176 km/h and a range of 270 kilometers at a constant speed of 100 km/h. In 2001 he presented his first model KAZ, a spectacular eight-wheeled vehicle, 6,7 meters long, developed with the help of Keio University and its students, as well as many other partners. In 2005, with the second generation of this vehicle, its name changed in Eliica (Electric Litio-Ion Car), and the advances are constant to create a model suitable for mass production.

The Eliica represents a completely new, large and luxurious supercar, 5.1 meters long, which stands out for its excellent performance with speeds between 190 and 370 km/h according to his version, and a range of 300 and 180 kilometers respectively. It also highlights the enormous power of its eight electric motors, reaching a total of 850 hp (the fastest one) and 640 hp (the most autonomy). The technical promise that soon may increase, even considerably, the autonomy.

The car calls attention for its unique design that takes the utmost care to the aerodynamics, and it takes four wheels in front and four in the rear, three of the four axes are directional, and all of them has an engine in the hub. In fact, in each wheel hub a powerful electric motor is installed, which transmits its power directly to the wheel, which only needed to be synchronized to give a harmonious feeling.

The concept of "integrated platform" is the basis of this new technology, consisting of electric motors within eight wheels, a frame which in turn incorporates almost all components plus the lithium-ion batteries (therefore all the weight is centered on the lower platform, ideal for excellent adhesion road). Another unique detail is the tandem suspension, helping to reduce the size of the wheels, or eight smaller wheels or four larger. wheels. The impact that cause the wheels on the road will be better disperse by more wheels ta¡han by only a few once.

Eliica is developed in two different versions, a model equipped with more battery, suitable for high performance, and another one as a luxury sedan to achieve its approval to be used on road tests. The design concept allows different solutions between a sports car, a sedan of more than four seats, a van or minibus, anything is possible on the same platform.

Two types of most modern lithium-ion batteries, which indeed appear to be the battery of the future allowing many refills without problems and having a very reasonable weight in relation to their power, are used. Recharge time is lower than in other types of batteries. It can create any size of final accumulator by attaching greater or lesser amount of stags. One of the batteries is specially prepared for high speed and high acceleration, while the other is to give a lot of autonomy. What changes is the energy density of between 41 Wh/kg and 72 Wh/kg and power density from 1,500 W/kg and more in the high speed version and 700 W/kg for a high autonomy.

In the Eliica four batteries forms a module, and twenty modules forms the complete battery pack. The car uses an inverter to convert the DC in AC and is water-cooled. Each engine under the control of this inverter has a maximum torque of 100 Nm, about 12,500 revolutions per minute and a power output of 80 kWh. The selected engines are synchronous permanent magnet type neodymium-iron. Integrated into the wheel hub carrying a planetary gearbox for reducing speed and disc brakes.

Both the KAZ and the Eliica has been thoroughly studied concerning the aerodinamic of the body, quite a challenge as this car likes to be a mix between a luxury sedan and a sports car, just to show that this electric vehicle can improve all the features of vehicles currently in fashion. To reach the maximum speed of around 400 km/h they realised specified studies of air resistance, also with the aim to reach a minimum energy consumption. In order to further improve in this area, Eliica already has design ready for its upcoming models, the last steps to reach mass producing cars in the near future.

"The functionality and performance of future electric cars have to be much higher than current models, only in this way it becomes socially acceptable," said Hiroshi Shimizu, engineer and father of KAZ .

The origins of the eight-wheeled cars:

The first reports date back to 1910, when the American M.O. Reeves presented his Octoauto, equipping a Willys Overland with dual front and dual rear axle. The battle between the first and last axle was 4.45 meters. Three of the four axes were steered, but not easy to handle. But there was much talk of security representing this configuration: the writer and editor Elbert Hubbard drove this Octoauto and was excited, the car jumped over the bad roads on a reasonnally speed without any punctures of the wheels.

In the thirties the German engineer Gotthard Rimmek patented his first eight-wheeled model based on a Brennabor, and somewhat later, a more perfect unit built on a German Adler. The main feature of this model were its pairs of wheels, arranged one behind the other with oscilation parallelograms in a progressive suspension, to which the mentioned patent achieved. This worked, but it was too bulky and loud for a car, and so the car disappeared like so many other inventions.