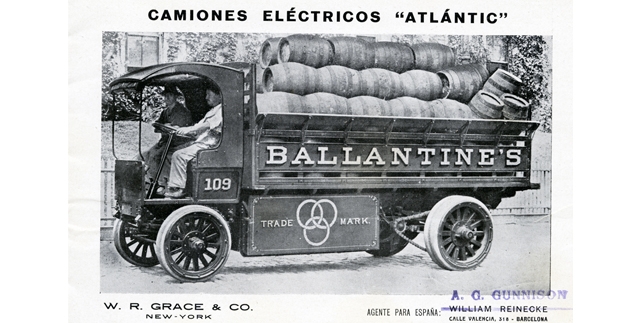 Share http://www.vchristianmanz.com
We found in Spain an original catalogue of the electric trucks from Atlantic (Atlantic Electric Vehicle Co, Newark, NJ 1912-1921). This catalogue is in Spanish with the stamp of the Spanish dealer, A.G. Gunnison from Barcelona. We are looking now for more informations about the Atlantic trucks sold in Spain and which companies used them.

If you know something about this, please don't hesitate to contact us.

The Atlantic trucks were manufactured in Newark (New Jersey) between 1912 and 1920/21, offering in the second part of its commercial life models from one to five tons of payload. The origin dates back to 1912, designed and developed by Arthur J. Slade, former chiefengineer from the Commercial Motor Car Company. After a year and a half of testing the vehicle finally it went on sale, equipped with lead-acid batteries then. Their speeds were limited to 15 mph and counted with a range of about 50 miles, not bad for the time and more than enough for most daily trips.

The company Atlantic Vehicle Co was restructured in 1916, changing owner, the name to Atlantic Electric Vehicle Co and also some technical details on the models to bear on the market until 1920/21, when it ceased production. In that time the company used electric motors from General Electric.
You can support me and my articles by donating the amount you want.
I will be very grateful.